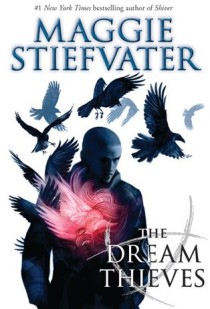 This is the sequel to The Raven Boys, a book that stole my heart with its story of Gansey, Ronan, Adam, Noah, and Blue and the mystical search for a long hidden king. I was excited to read the sequel, having no doubt that Maggie Stiefvater would craft an equally wonderful follow up to my new favourite book.

Spoilers if you haven’t read The Raven Boys yet!

Now that the ley lines around Cabeswater have been woken, nothing for Ronan, Gansey, Blue, and Adam will be the same. Ronan, for one, is falling more and more deeply into his dreams, and his dreams are intruding more and more into waking life. Meanwhile, some very sinister people are looking for some of the same pieces of the Cabeswater puzzle that Gansey is after…

Before I go on, I want to talk about the cover. I don’t love it, for the same reason that I don’t love the paperback cover of The Raven Boys. I prefer to picture the characters as I see them in my head, and it was really jarring for me to suddenly see them on the book covers! Other than Ronan’s face on the cover (I’m assuming that’s Ronan), I do like the rest of this cover. It’s just strange to see depictions of characters that are already a certain way in your brain!

But on to the important thing: the story itself! I love the writing. Maggie Stiefvater has such a wonderful way with words, and I found myself trying to slow down and savour this book, even though I wanted to speed through it at the same time to find out what was going to happen next.

This story was never predictable! Even when the mystery surrounding Glendower seemed to clear up, it became even more mysterious and strange as the book went on.

And of course I still love these characters. They’re changing, though. Adam starts to understand what his sacrifice on the ley line cost and what it means for the search for Glendower. There is a lot going on with Ronan and his dreams, which was all fascinating. There’s a fabulous Blue and Noah scene (I need to talk about it with someone!!!). And Gansey struggles in a way that I didn’t see in the first book. I don’t want to say anything more than that, because I think the characters are the best aspect of this series – I would honestly read a book about them just hanging out and not doing anything else – and reading about their adventure as it unfolds is amazing.

I also liked the way this book began to explore their lives beyond Aglionby and what may happen in the future. I felt that there was always a hint of something sad or melancholic, especially when the gang’s thoughts turned towards the future.

I have to say that Blue’s yearning to live at Monmouth Manufacturing and be part of the boys’ group totally reflects my own! I sympathized with her because I felt like I wanted to move into Monmouth and search for Glendower with these characters. I missed them whenever I had to put the book down, and definitely miss them now that I’m finished.

I will absolutely be buying my own copy of this book when it comes out so I can read it again! There were just so many fascinating scenes, and amazing dialogue and interactions between characters. I don’t know where this story will go next but I’m so eager to find out!