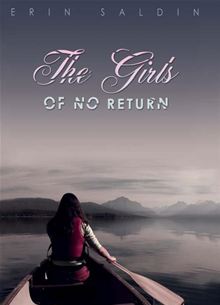 The Girls of No Return By Erin Saldin

Published by Arthur A. Levine Books on February 1, 2012

Erin Saldin's The Girls of No Return is a lacerating young adult debut about girls, knives, and redemption. The Alice Marshall School, set within a glorious 2-million acre wilderness area, is a place where teenage girls are sent to escape their histories and themselves. Lida Wallace has tried to negate herself in every way possible. At Alice Marshall, she meets Elsa Boone, Jules, and Gia Longchamps, whose glamour entrances the entire camp. As the girls prepare for a wilderness trek, Lida is both thrilled and terrified to be chosen as Gia's friend. Everyone has their secrets – the “Things” they try to protect; and when those come out, the knives do as well.

This is a difficult book to summarize, because certain plot aspects are very vague until much later into the book. Lida is a troubled teenager, although the details of why she is ‘troubled’ are not clear at this time. She is with her father and step-mother, Teri, on her way to the Alice Marshall School, a sort of wilderness school for teenage girls with problems – drugs, alcohol, arson, etc.

Lida’s plan is to avoid sharing anything about herself, just get through her time, and then go home again. However, a couple of her cabin mates don’t make it easy: Jules is friendly and seems eager to make friends with Lida. Then there’s Boone, who is tough and a little scary, but slowly becomes a friend of Lida’s.

Lida successfully avoids sharing anything about herself for a while, but the arrival of a new girl to the school named Gia changes things. Gia is pretty and mysterious – what people know about her life seems to come in snippets and hints at a glamorous lifestyle. Boone and Gia clash right away, and for some reason unclear to Lida, Gia seems to want to be her friend. Suddenly Lida is caught in the middle between Gia, whose friendship and attention flatters Lida and makes her want more, and Boone, who is honest and true to herself, and can see through Gia.

The story is told in a non-linear fashion, with some journal-type entries of Lida’s interspersed between the chapters, looking back on the events of the story. The story builds slowly to its climactic scene, and while I liked the book, there were times where it felt like there wasn’t really anything happening. That might not appeal to all readers, but I liked it for the atmosphere and the opportunity to spend some more time in Lida’s head.

I liked this book and the way the story was told slowly. I also couldn’t be sure that Lida could trust either Boone or Gia, and because Lida was so closed off and didn’t have real friends, I think she wasn’t sure who to trust either. Opening up about herself to other people was not something she was used to doing, and she experienced the betrayal that can come from trusting the wrong people. There were also elements of jealousy, possessiveness, and friendship explored in the book, and while it wasn’t a page turner, it was interesting.

If you like novels that focus on character and setting, I definitely recommend this book.