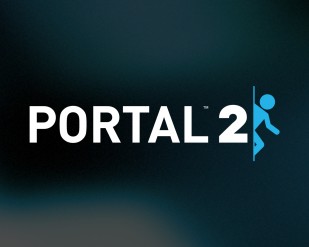 I love this game. It’s amazing and everyone should play it. The end.

Well, I guess I should say a bit more, but that line sums up everything I’m going to write about this game.

Let me say now that there is a co-op option that I have not played yet. This entire post refers only to the single-player game, but Mr. Pingwing and I played through the whole game on single-player together. And it was awesome.

As you can tell from the title, this game is a sequel to Portal, released in 2007, as part of a bundle of other games called The Orange Box.

I have never played Portal. I have read other reviews and commentary that say you should play Portal before playing Portal 2 or else the entire game’s narrative will go over your head, you won’t know the back story and will be confused, etc., but that is not true. All I did was get on the internet, read the game’s Wikipedia entry, and I was good to go.

What you need to know about the first game in order to follow the story of this game is that your character, Chell, faced off against an AI character, GLaDOS, who had you solve a series of puzzles in Aperture Labs and eventually tried to kill you. You ‘killed’ her by dismantling her hardware and tried to escape, but in the end, you were brought back to Aperture Labs.

So that’s the story. You can play through the game, ignoring the story entirely, and just solve the puzzles, but the storyline in this game is amazing, and since taking a moment to familiarize yourself with the background is quick and easy, you may as well do that.

And so we begin Portal 2, waking up in Aperture Labs, which appears to have fallen into a serious state of disrepair. You encounter a personality core named Wheatley, who has a British voice and is hilarious. I really loved Wheatley. He guides you through the first part of the game, where you locate the portal gun. The story really is something that every player should experience as spoiler-free as possible, so I don’t want to say anything more. All you need to know is that your goal is just to get out of the building. To do that, you must move through a series of rooms, solving the puzzle in each one using your portal gun in order to move on.

The early part of the game serves as an  introduction to the mechanics of the portals. As you move through Aperture Labs, the puzzles become increasingly complex and challenging, with new elements added in.

Eventually, you end up with a portal gun that allows you to fire both colours of portals, and that’s when things really get fun! New elements are added to the puzzles, and you will really have to stop and think about how to reach the exit of each room. Mr. Pingwing and I played through the game together, and there were puzzles that took a good 20, 30 minutes of he and I sitting there and thinking, talking through various solutions, testing them out, and eventually succeeding. I realize that may not sound fun, but trust me, it is. And the feeling you get from solving a really tricky puzzle is amazing! I felt so smart and proud of myself (and Mr. Pingwing, of course).

It’s also rewarding to see the story through to the end. The humour in this game is great. Mr. Pingwing and I were laughing out loud. While I had been told that the game was super funny, I didn’t expect to connect with the story as much as I did, so that was a pleasant surprise. Events in the game had me feeling sad, scared, happy, angry…the game gripped me and I felt very invested in the outcome and the fates of the characters.

As you make your way through the building, you have to go ‘behind the scenes’ and move through locations like old offices and assembly lines. The detail in these areas is astonishing. The closer you look, the more you find, like old motivational posters from the 50s. You make your way through the facility in such a way that you learn about the origins of Aperture Labs and encounter evidence of events that tie in to your character’s plight, and putting those pieces together was great. It also adds to the game’s atmosphere.

The game play mechanics are simple. One joystick controls the movement of your character. The other joystick controls your view. One shoulder button fires a blue-ringed portal, and once you acquire the ability to fire the orange-ringed portals, you use the other shoulder button to do so. Coming from Nintendo systems, I was worried that I would be confused by two joysticks, but I wasn’t.

The major hurdle that you must overcome is the way you think. It isn’t as simple as getting from point A to point B. You need to consider the physics involved with moving yourself (and, later in the game, objects) through the portals. You need to think about trajectory, and cause and effect. Once you can think like that about the puzzles, you will solve them much faster!

Portal 2 succeeds in both its story and its game play. Mr. Pingwing and I obsessed, playing it non-stop. Then I watched the ending movie on You Tube multiple times. I felt such elation and satisfaction at the end of this game. That feeling has not been matched in any other game I’ve played. No matter how much I love Mario, Zelda, Pokemon, I have not felt that same sense of achievement and satisfaction from completing games in those series (although finishing LoZ: A Link to the Past comes closest).

This is a game for everyone. Even if you don’t play games, you should play this one. Do you have a computer? Buy the PC version and play. Seriously. It’s a 10 out of 10, A+++ game.

Of course, my experience is coloured by never having played the first Portal game. If you have played that, you may not see Portal 2 as the eye-opening, jaw-dropping, aha-inducing experience that I do, but if you are new to this series and the concept, I almost envy you for the amazing experience that waits for you.