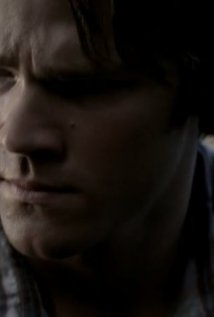 As Sam buries their father's dog tags at their mother's grave, Dean suspicions are aroused when they notice dead plants over the nearby grave of the recently deceased young woman Angela Mason (Tamara Feldman). They soon discover that the woman's cheating boyfriend was murdered the previous night. Sam and Dean dig up her grave and find the coffin empty. They deduce that her close friend Neil (Christopher Jacot), who was secretly in love with her, resurrected her as a zombie. Having killed her boyfriend, her next target is her roommate, with whom her boyfriend had been cheating. However, Sam and Dean save the woman and kill the zombie with a silver stake. Dean later apologizes to Sam for his recent behavior, and reveals he has had trouble coping with his guilt over their father's death.

Alright so this episode opens on a guy and a girl – just friends – talking. Her boyfriend (Matt) shows up, friend keeps him out, but the girl (Angela) is gone when he goes back to her. Then Matt calls Angelia and she’s on the phone while she’s driving, which is a big no-no, crashes her car, and dies.

Here come Sam and Dean! They’re going to visit their mother’s grave (even though there was no body to bury). Sam says it feels like the right thing to do after their father’s death.

When they get to the grave, Sam puts their dad’s dog-tags on the headstone. Sad Sam.

Dean, meanwhile, notices a patch of dead grass and a twisted brown tree in the cemetery. The grave at the centre is a recent on, but the flowers on top are dead. Turns out that Angela’s funeral was three days ago and everything around her grave is dead. No one can explain it. Could this be a sign of a demonic presence or a spirit?

Sam thinks this isn’t about a hunt, but they go to check things out. Angela’s dad teaches at the university and has a weird old book. He says it’s Greek. He starts talking about how he still feels Angela’s presence, how he’ll call her then remember that she’s dead. Sam still doesn’t think there’s a case here – just a grieving father.

Dean believes that Angela’s grave has been turned into unholy ground, bit Sam argues that this about their mom’s grave. Dean wouldn’t go near it because he’s trying to avoid thinking about their mother or father. Dean, of course, gets angry and goes out for a drink.

Back to Matt. He’s at home, watching old movies. The plant on the table nearby dies. Matt pauses the movie and sees Angela’s reflection in the mirror. He turns around and gets his throat slit.

Dean breaks into Angela’s place, meanwhile, and sees her roommate. He calls himself Alan Stanwyck, says he’s Angela’s cousin, and he’s there to pick up her stuff.

While Dean talks to Angela’s roommate, he learns that Matt is dead (apparently a suicide), but that Matt kept mentioning that he saw Angela.

Hahaha Sam is watching ‘Casa Erotica’ and then Dean walks in – “Awkward”.

Dean tell Sam what he’s learned, and Sam apologizes, saying maybe there is something really going on here.

When Dean was at Matt’s, he saw the dead plants and his dead fish. He also snagged Angela’s diary and reads it, learning about her friend from the beginning of the episode.

Sam and Dean pretend to be grief counselors and visit him. It turned out that Angela loved Matt, but he cheated on her and she saw it the night of the accident. Her friend thinks that Angela’s death is Matt’s fault.

The brothers wonder if that’s the case, is it over now that she got her revenge on Matt?  Dean says they should burn the bones (although technically, as Sam says, they’d actually be burning a ripe, rotting body, haha). They dig up Angela’s grave but when they open the coffin, it’s empty!

Angela’s friend has her reanimated body in his basement! Angela kisses him – seems that he loved her but when she died, he couldn’t let her go.

The brothers see symbols on the inside of Angela’s coffin so they go to her dad’s house to ask about the symbols. He teaches ancient Greek and the symbols are part of a necromancy ritual. Dean starts to accuse Angela’s father of bringing him back, telling him, “What’s dead should stay dead”. IRONY? You know, because Dean was kind of almost dead (more than once, actually) over the course of the show???

Dean apologizes, but says they need to figure out how to kill zombies.

Neil (Angela’s friend) always told Angela that Matt didn’t deserve her. He suspects that she killed Matt but zombie-Angela says she didn’t. She knows that he always wanted her.

Dean reads what Angela wrote about Neil in her diary. He’s her dad’s T.A., so he has access to those books. They go to Neil’s with silver bullets, and see dead plants in the house.

They go down to the basement but there’s no one there. Dean says that it looks like a zombie pen though.

Angela killed Matt because he was cheating. Maybe Angela’s roommate was really broken up over Matt’s death because she’s the person he cheated on Angela with. Cut to the roommate, who’s hearing strange noises, and when she goes to investigate, zombie-Angela shows up! She grabs the scissors and accuses the roomie of cheating with Matt. Roomie (Lindsay) stabs zombie-Angela with the scissors but she isn’t dead! Thankfully, Sam and Dean show up and shoot zombie-Angela before she can kill Lindsay, but zombie-Angela gets away.

It’s time to chat with Neil. Silver bullets did something to zombie-Angela, but they aren’t enough. They might have to nail the undead body to its gravebed! The brothers find Neil and confront him, telling him zombie-Angela has killed someone and is trying to kill more people.

UGH I HATE THIS ‘FRIENDZONE’ BS. GET OVER IT. (The friendzone is a topic for a separate rant another time but SIGH)

The brothers leave, and Neil goes to zombie-Angela, who says he needs to stop Sam and Dean from what they’re trying to do. Neil says okay, but realizes that she really did kill Matt and tried to kill Lindsay. Zombie-Angela gets mad at him as he’s going to leave, and kills him.

Sam and Dean are setting up the ritual in the graveyard and hear zombie-Angela coming. They split up to find her. Sam gets to her first, and she tells him that she didn’t ask to be brought back. She’s still a person. But Sam shoots her in the forehead and runs, with zombie-Angela chasing him.

Dean shoots her and she falls back into her grave. She asks them not to do it, but Dean stabs her, pinning her to her coffin.

“What’s dead should stay dead” and they bury her again.

Sam compliments Dean’s plan to fake the ritual and lure zombie-Angela back to the cemetery. He asks Dean if he wants to stay and see their mother’s grave, but Dean says no.

Car scene – total silence. Dean pulls over, and they both get out of the car. Dean says he’s sorry, for the way he’s been acting, and for Dad. He was Sam’s dad too and it’s Dean’s fault he’s gone. Back at the hospital, Dean made a miraculous recovery, their dad died, and the Colt disappeared. He’s not sure how it all went down, but Dean knows the demon’s involved and believes that it’s all his fault.

What could Sam say to make that alright? He’s got nothing.

Another monster-of-the-week episode but I love that they talk about John Winchester and what went down in the season premiere.

-Zombies: Greek necromancy ritual; what comes back is not exactly the same person they were when alive; too much lore on how to kill a zombie to know what really works, e.g. silver, setting them on fire, etc.