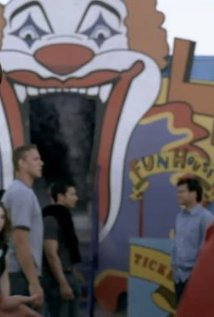 After cremating their father's body, Sam and Dean refuse to discuss his death. Instead, they head back to work, and track an old message on John's phone to Harvelle's Roadhouse, a bar frequented by hunters. There they meet Ellen Harvelle (Samantha Ferris), an old friend of John's, and her daughter Jo (Alona Tal). As the group's resident genius, Ash (Chad Lindberg), attempts to analyze John's research on Azazel with his computer, the brothers investigate the murders of visitors to a traveling carnival, currently near Medford, Wisconsin. They discover that a Rakshasa—a demon of Hindu mythology—has been taking the form of a clown and tricking children into inviting it into their homes so that it can eat their parents. When not feeding, it takes the form of a blind knife thrower at the carnival. The brothers kill it with a brass pipe. Dean later takes out his anger at his father's death on the Impala, one of his most prized possessions.

This is our first post-John Winchester episode. 🙁

Sam is scared of clowns! I’m not afraid of clowns generally, but holy heck, the scenes with someone waking up to find a murderous clown beside the bed are terrifying.

Kids are so weird. I see this clown outside in the dark waving and I’m all NOPE! But kids are like, Yeah, I’d better let him in to play!

Seriously, this opening is genuinely super creepy. I’ve seen this episode multiple times and it still gives me the chills.

Sam wants to know if their dad said anything to Dean before he died and of course Dean says no. We the viewers know that’s a lie!

And back to Bobby’s, where Dean is fixing the precious Impala. Dean tells Sam that he’s okay, but they’ve been at Bobby’s for over a week and they haven’t talked about their dad’s death – and the Colt is gone. None of this is good. The only thing Dean can do is work on the car.

But Sam found one of John’s old phones, with a four-month old voice-mail from someone named Ellen. They go off to check it out and end up at some dumpy looking place called the Roadhouse. LOL they’re pulling up in a van and Dean is ashamed.

So the place seems empty and they pick the lock to get in, only it turns out to be definitely not empty. We meet Ellen and her daughter Jo (yay I love them!). Ellen hears their names and knows they’re the Winchesters. Her voice-mail to John was about helping with the demon.

The Roadhouse is sort of like a hunter bar, which I love. Any time they expand upon the world of the hunters and show us that there are lots of them out there, not just Sam and Dean, I love it. World building!

Ellen says that John Winchester was like family once – the boys have to break the news to her that he’s dead. They also meet Ash, the mullet-sporting genius, who will help them. If they can track the omens indicating a demonic presence, they can track the demon. Ash will need 51 hours.

In the meantime, Ellen has a folder that turns into a case.

We learn that Jo’s dad was a hunter, but he passed away and that’s how she and Ellen got into the life. No one ever gets into hunting without having lost someone.

It felt like Dean was going to try and hit on Jo, but then he didn’t. It always felt to me like there was something between those two.

They think it could be a spirit, maybe a cursed object in the carnival’s possession. I love the way they brainstorm like that.

Sam thinks taking this job is what their dad would have wanted (but seriously guys, when did Sam ever do what his dad wanted him to?).

Ugh another creepy scene where a kid wakes up its parents with the creepy clown!

Sam and Dean roll up to the carnival and there are a lot of clowns. Sam looks nervous! And with good reason – the victims of the killer clown are ripped to shreds.

But the cursed object, if that’s what they’re dealing with, could be anything. They’ll have to scan for EMF and notice a Help Wanted sign. They apply for jobs so they can check for EMF as inconspicuously as possible.

The owner tells Sam and Dean that the carnival is a refuge for outcasts and tells them to live ‘regular’: go to school, have kids. But Sam says they don’t want regular. He seems pretty convincing.

After, he tells Dean that he doesn’t know if he wants to go back to school. They fight over why Sam would do what he thinks their dad would want now, when he spent so much time arguing with him.

So they’re working, checking for EMF, not really finding anything in the fun house or anywhere else. Sam calls Dean to tell him as much. What if the spirit is attached to its own remains, not a cursed object? Need to look for bones. Oops blind knife-thrower overhears them talking about bones and EMF. Dean tells him that they’re writing a book about ghosts.

Then they see a girl point out a clown to her parents, but they don’t actually see the clown. They end up following the girl and her family home, staking out the place. When they see the girl let the clown inside, they spring into action! They shoot it with rocksalt but it gets up and vanishes as it crashes through the door.

So we are not dealing with a spirit! Maybe Ellen and Ash can help? And hey, why didn’t John ever tell them about Ellen? Sam is getting mad at Dean for his ‘strong silent crap’, saying he isn’t dealing with their dad’s death. Dean is in turn mad that Sam now cares about what their dad would want, calling it too little, too late.

Back to the case.  Ellen’s best guess is that they are dealing with a Rakshasa, and the boys think the killer clown could be Cooper, the owner of the carnival. They get back to the carnival at night, after closing, to investigate. Dean goes to get a brass knife from the blind knife thrower but finds the clown costume in his trunk. It isn’t Cooper, it’s the knife thrower!

As Dean realizes this, he shows up but turns invisible. Dean manages to find Sam and tell him, but Dean didn’t get the brass knife. They run into the fun house but get separated.

Sam manages to get a pipe from the pipe organ. Dean’s in trouble! But Sam stabs the Rakshasa with the pipe, which seems to kill it.

Back at the Roadhouse, which has a few hunters in there cleaning guns and drinking, Sam leaves Jo and Dean alone (super subtle, guy). Dean says he would normally hit on her, but not these days. It’s the wrong place, wrong time.

Ash arrives and says he can’t find the demon yet but he’s set up something on his computer that will track the omens. He’ll call them if anything shows up (I love that Ash went to MIT but got bounced for fighting).

Sam and Dean go back to Bobby’s, and Dean works on the Impala. Sam says Dean was right about him and their dad. Sam’s sorry he tried to pick a fight the last time he saw their dad, and it is too little too late. He misses him and feels guilty. Sam says he’s not alright and neither is Dean.

After Sam leaves, Dean smashes the Impala’s window and beats up the car. Nope. Definitely not alright.

This was a really good episode. I love the way it makes the hunter world feel bigger by adding Jo, Ellen, Ash, and the Roadhouse.

Also, this is a creepy episode! Killer clowns!

Even though John Winchester is dead, his character is still super important to the show. And finding Azazel seems like it will definitely be a focus of this season.

-Rakshasa: ancient Hindu creature; appears in human form; feeds on human flesh; can make itself invisible; can’t enter a home without being invited in. Live in squalor; sleep on a bed of dead insects. Only feed a few times every 20-30 years. Can be killed with a dagger made of pure brass.