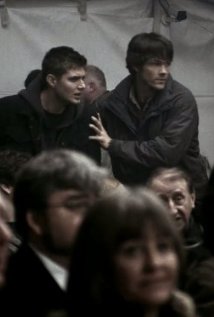 While battling a Rawhead, Dean gets electrocuted and his heart is damaged. Doctors give him only a few weeks to live. Sam searches for a way to save him and believes he may have found an answer in a preacher who claims to heal the incurable (Kevin McNulty). At the congregation, Dean is chosen, and is cured of his condition. However, he and Sam soon learn that an openly gay teacher died of a heart attack at the same moment that Dean was healed. Further research reveals that deaths occurred in unison with other healings, prompting the brothers to believe that the preacher is using black magic to control a Reaper; healing people in exchange for the lives of those he deems immoral. However, they eventually discover that his wife (Rebecca Jenkins) is behind everything, and rush to destroy the altar used to control the Reaper. The preacher begins to "heal" Layla (Julie Benz), a young woman with a brain tumor, and the Reaper then goes after Dean. Sam destroys the altar, and the freed Reaper takes the wife's life, though the young woman is not healed. She later tells Dean that she has made peace with her coming death, and Dean promises to pray for her.

I’ve been very much looking forward to rewatching this episode. I remember this is being a really terrific episode, and that Julie Benz (Darla!) is in it.

I love the opening of this episode, with Sam and Dean in the middle of a job. They’re going after a rawhead, and Dean gets electrocuted! This early in the show, before knowing how often Sam and Dean would die/be severely wounded, it was really shocking to me.

Dean ends up with major heart damage and the doctor gives him two weeks to one month, at the most. Major woah. And they don’t have insurance.

Dean, of course, seems pretty resigned to dying. and OF COURSE they can’t reach their father. I’m infuriated.

But I love that Sam says he’s determined to do whatever it takes to save his brother – even taking Dean to a faith healer.

And of course Dean is skeptical. He certainly doesn’t believe in faith healing. Does he believe in God? (I know the answer but the first time I saw this episode and didn’t know the answer, it was interesting to think about)

I just love Sam’s determination. He gets them seats up front and tells Dean to get up onstage.

Watching this, I thought it was about time that religion made its way into the show a little.

It turns out that the reverend is a pretty likeable guy. So Dean is onstage, Sam hoping that he’ll be healed but Dean is skeptical…I really love the way this scene is shot. But what’s that! Dean sees something…a reaper!

But what a miracle – Dean is healed! They go back to the doctor and there are no signs of heart trouble. But…someone his age died of a heart attack at the exact same time that Dean was being healed. Tradesies! A life for a life.

Sam wants to let it go and move on, but Dean can’t. He doesn’t believe in miracles, and he goes to visit the reverend and his wife to try to figure out what happened.

Dean is always wondering, “Why me?” He doesn’t believe that he’s worth saving. But the reverend says that he’s guided by the lord and saw a young man with an important purpose, someone who has a job to do that isn’t finished.

On the way out, Dean runs into Layla, who has a brain tumor. It’s inoperable and she has about six months to live.

Meanwhile, Sam investigates the guy who died. He died at the exact same time that Dean was healed  – there’s a pattern.

The scene with the girl jogging – running from the reaper while reverend Roy is healing someone else – is really well done.

People want to believe. But it turns out that the reaper is bound and being controlled by someone. Sam tells Dean that they can’t kill the reverand, because he’s a human being, but in Dean’s eyes, he’s a monster.

Sam figures out how the reaper is being controlled, and also that the reaper’s victims are being chosen – it isn’t random. Whoever is controlling the reaper is making it go after people that they think are immoral.

It turns out that Roy’s wife is the one controlling the reaper. Roy truly believes that he’s healing people, but his wife is using a binding spell to keep it away from Roy, who was ill. She thinks the lord has chosen her to do this work.

Finally, it’s Layla’s turn to go up and be healed. Unfortunately for her, Sam and Dean stop it before Layla can be healed. This is kind of a lesson to them that they can’t save everyone. Now that the reaper is not bound, it looks like he’s coming after Roy’s wife!

It’s bittersweet. Dean feels guilty even though he had to stop it. But what would you do? Would you go through with it, if you knew that someone else had to die for you to be saved? Dean doesn’t feel like he did the right thing, but Layla shows up at their motel and tells him that they have to have faith when miracles don’t happen – not just when they do.

They can only try to save people from monsters and demons and supernatural stuff, not from nature/biology.

Sidebar: it’s very interesting to compare this reaper’s appearance to the appearance of other reapers, e.g. Tessa.

I don’t like to think of an alternate timeline in which Dean is not healed and dies of heart problems at such a young age, with Sam going off to find their father on his own and then who knows. This is a really early episode, but it’s pretty important in the overall storyline of the show that Dean was healed so he didn’t die in season one!

I really love this episode. I love the way they are beginning to address religion; I love the way this episode is shot; I love Sam’s commitment to saving Dean; and of course I’m upset beyond words at their father’s failure to appear or even contact them when Dean is so close to death.

-Reaper – “a” reaper, not “the” reaper: there’s more than one. They can stop time? And you only see a reaper when it’s coming for you.