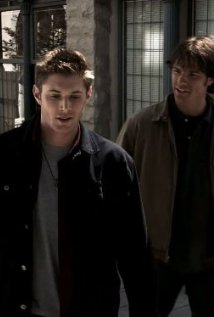 Sam and Dean help a girl whose date became a victim of the "Hook Man," a famous urban legend that turns out to be real, in a small college town somewhere in Iowa. In order to save her and her father, the local minister, the brothers have to find the ghost's bones so they can destroy them. But Sam and Dean run into a problem when they discover that the bones are in an unmarked grave.

Again, I find the lighting in these early episodes so dark.

This episode features another classic urban legend: the hook man. The opening here unfolds pretty much the way that I remember hearing about it, with the strange noises outside of the couple who are making out in the car; the boy goes to investigate; he never comes back but the girl hears a mysterious sound outside that turns out to be his feet (or his hands, depending on the version, I suppose) scraping back and forth along the roof of the car because he’s been killed and hung up by the hook man. Yikes!

Aah Sam is using a pay phone! I cannot remember the last time I used a pay phone.

Lori and her father: an overprotective father and his young daughter who’s just trying to live her life.

Ooh, the death of her roommate, with the ‘Aren’t you glad you didn’t turn on the light’, is also just like I remember it from the urban legend – although I’m not sure that I heard that as part of the hook man legend, or if it was another legend.

According to my notes, this is the first time on the show that we see them using rock salt shotgun rounds on spirits. They don’t ‘kill’ the spirit, but they are a deterrent.

Man when Sam talk to Lori he uses what I still think of as his ‘Gilmore Girls’ voice.

Hook man lore: he is a spirit, so we have to salt and burn the bones. I love the scene of Dean in the cemetery: it’s nicely shot, kind of creepy, and we get to see the way they torch the bones. Hmm, that doesn’t seem to have worked though…turns out that you may also need to look for a significant object, e.g. his hook.

PLOT TWIST! Lori’s father is not as upstanding and moral as he seemed! The hook man is tied to Lori, not her dad.

This is another good Monster of the Week episode, but I’m still waiting for something to move the larger story forward.