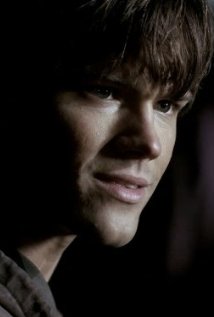 Sam has a premonition of a man being killed in Saginaw, Michigan, but the murder is made to look like a suicide. They talk to the victim's son Max (Brendan Fletcher) and fail to find anything supernatural, but warn Max's uncle to be careful. When he, too, dies a mysterious death, Sam and Dean believe the family to be cursed. However, their investigation reveals that Max was regularly beaten by his father and uncle as a child. Sam then has another vision of Max using telekinetic abilities to kill his stepmother, angry at her for not having stopped the abuse. The brothers stop Max, and Sam learns from him that, when he was a baby, his mother also died in the same manner as theirs. When Max's anger suddenly resurfaces, he locks Sam in the closet. Sam receives another premonition, showing Max killing Dean. Trying to escape, Sam manages to telekinetically free himself and talks Max out of killing them. A distraught Max then takes his own life.

Okay we start with an automatic garage door…and the car just locked itself. That’s spooky. So this guy’s death is made to look like a suicide but we, the viewers, know that it’s some sort of murder.

Oh wait it was all a dream! Or was it? Sam’s abilities…dreams that sometimes come true?

Too late! Sam’s dream came true. Was this a premonition? It certainly seems that way.

Haha, I love this scene of the boys showing up dressed as priests, which I don’t think we really see them do much, if at all, again. But Dean dressed as a priest, stuffing his face with those little hot dogs, cracks me up every time.

Jensen Ackles is so good at making these subtle facial expressions that convey so much. I’ve said it before in this rewatch project but I am so impressed with how quickly he and Jared Padalecki became Sam and Dean.

So based on their investigation, we can be reasonably certain that we are not dealing with a spirit. WOAH nice fancy infrared thermal scanner! Lasers!

Ooh Sam is having another premonition dream! But this time it’s happening while he’s awake, so I guess it’s a vision and not a dream.

Aww Dean doesn’t want Sam to hurl in the car. I love how much he loves that car. It’s almost their home in the early seasons: they don’t have anywhere they regularly stay at this point because they’re always traveling from town to town and spend their nights in a motel or sometimes even in the car. The Impala is one of the few constants they have right now.

This episode really begins to lay the groundwork for the Sam ‘special child’ storyline that takes up a lot of season two, and feeds into later seasons.

I like the way they’re theorizing about spirits. They’re good ideas, but turns out they aren’t even close to the truth: Max also has abilities, and after suffering through abuse from his father and  uncle, and his stepmother turning a blind eye to it, he’s killing them with his recently-developed abilities.

There are interesting parallels between Max and Sam. And again, Dean sees a human who willingly hurts other people as a monster, where Sam says that they can’t kill him because he’s human.

Oh boy, Sam and Dean are in danger! Dean is so protective of Sam still, which is super touching.

Max’s situation is so sad because he’s been abused and helpless his whole life, then he suddenly develops this telekinesis and feels a sense of power and control.

WOAH it turns out that Max’s mother did NOT die in a car crash like Sam and Dean had been told! She died just like Sam’s mother! And Max and Sam are the same age and developed their abilities around the same time. Hmm…

Maybe a life like Max’s is what could have been for Sam and Dean, if John Winchester hadn’t had his eyes opened to what was really out there and raised his boys as hunters.

We see that Sam’s ability does turn into some telekinesis, at least when Dean is in danger, after he has that premonition of Max killing Dean. Perhaps Sam is getting stronger?

Oh damn, I forgot that Max killed himself. So sad. Again, we are faced with the reality that Sam and Dean can’t save everyone. Of course Sam will blame himself, but he says that they’re lucky that they had their father, because like I said above, things could have gone another way for them after their mother died.

Sam is wondering about the demon…maybe it was after him and Max? We’re starting to pull back and look at the bigger picture.

Again, Dean is protecting Sammy. He’s looked out for him his whole life. And although Dean tries to make light of it, he’s clearly worried about Sam and what is happening with his abilities.

I love that this episode strongly addresses the bigger storyline. This really sets the stage for much of what comes later.

-When dressed as priests, the brothers use the names Fathers Simmons and Frehley (Kiss)