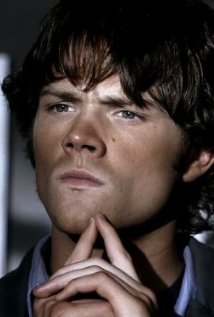 Sam and Dean are called in to investigate when a plane crashes under mysterious circumstances. Their investigation leads them to the conclusion that a demon is possessing people and causing them to crash the plane they are on. Things become more urgent when they discover that the demon is going after the 7 survivors of the crash, including the pilot and a stewardess.

Okay so this episode marks the first time that we encounter something that will be a pretty major, consistent enemy of the Winchester brothers: demons. We see our first demon early on, although we may not know what it is initially, and the black eyes of someone possessed by a demon is something that they still use on the show.

(I may have walked around whispering ‘Cristo’ after I saw this episode for the first time).

I’m so fascinated by the way they treat demons and the vessels (bodies of the humans they possess) in this and other early episodes, contrasted with the way they do in later episodes.

It’s so obvious that Sam plays ‘good cop’ when they interview people in these early episodes. Also, I love Dean’s pride at his homemade EMF device, and Sam’s sass.

[Husband notes that Sam asking Dean what he was holding – the EMF device Dean made out of an old walkman – is not something that would happen now, but it’s interesting to see these characters at the start of the series when they don’t know each other as well as they do now]

The demons in this episode don’t look as smoke-monstery-y as they do in later seasons, and seem to be entering their vessels via the eyes, rather than the mouth as they do now.

Part of what I really liked about this episode was that the job comes from someone that their father has helped in the past, pre-show. It gives a sense of history.

Haha, of course Dean is afraid to fly. Jensen Ackles’ comedic skills were already being used really well by this fourth episode. And also, Sam talking Dean through his fear of flying was really sweet.

I still find the music during these ‘action’ scenes a bit goofy. I’m not loving it.

Ooh, this airplane demon made a reference to Jess! I’m glad her character still factors into the show.

Let’s all take a moment to appreciate that the Winchester brothers have exorcised their first demon! That was pretty exciting!!

AND I loved the Air Canada logo on the plane that flew overhead at the end of the episode! Made in Canada 🙂

This was still another Monster of the Week episode, but I love references to John Winchester and Jess. Also, Dean’s cell phone number is 785-555-0179. I’ve read online that for a while after the episode first aired, if you called that number, you’d hear an actual message recorded by Jensen Ackles. Cool!

-Demons: we learn that sulfur indicates a demonic presence; those possessed by demons have all-black eyes but can disguise them; demons control a person’s body – a vessel – and seem to look like a little smoke column when not using a vessel