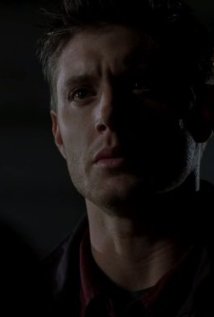 Season One, Episode One: Pilot

Sam and Dean Winchester were trained by their father to hunt the creatures of the supernatural. Now, their father has mysteriously disappeared while hunting the demon that killed their mother, 22 years ago.

This episode takes place in Lawrence, Kansas, where it all begins for Sam and Dean, 22 years prior to ‘present day’ of the pilot episode (so if the pilot is set in 2005 and this scene occurs 22 years earlier, that places it in 1983). This is set up nicely as a bit of a spooky scene, with the shadows of the tree branches moving. I don’t think I’d noticed that before.

I love getting our first glimpse of John Winchester, asleep in front of the television. It seems like such a perfectly normal fatherly thing, but it is so at odds with who we know John Winchester becomes. And of course, if he’s down here sleeping, who did Mary Winchester just see in the baby’s room standing by the crib? Creepy!

This scene is the impetus for nearly everything that comes after, in terms of Sam and Dean’s story: a monster – at this point we aren’t sure what it is – sends Mary to the ceiling, where she’s helpless to protect her son or herself, and kills her by cutting her open and setting her, and the rest of the house, on fire. And here is Dean, being told by father John, to take Sam and get out of the house. This is the earliest instance we see of Dean being in the position of being responsible for Sam and protecting him.

Sadly, that’s the end of the line for Mary Winchester. Without knowing what happened next, we flash forward to Sam, now in college, with his girlfriend Jessica. Ah, precious Sam with his young Sam hair and Dean from Gilmore Girls face! He look so young, it’s shocking. We really have watched him grow up over these ten seasons!

Anyway, Sam seems to be a normal, happy college kid, but one visit from older brother Dean announcing that Dad is missing is all that it takes to throw Sam off course and get wrapped back up in what we learn is ‘the family business’: saving people, hunting things. What kinds of things, you may ask? Monsters. Ghosts. Things that go bump in the night. Basically all the things you’re scared of in the dark that you tell yourself don’t exist.

They do exist, and it seems that in the wake of Mary Winchester’s death, John Winchester became what’s called a hunter, and raised his children to be the same. This is nicely illustrated by Dean and Sam’s exchange:

Sam: I swore I was done hunting for good.

Dean: Come on, it wasn’t easy, but it wasn’t that bad.

Dean: Well, what was he supposed to do?

I just love this scene between the brothers because I feel like it paints such a clear picture of their childhood. John Winchester wasn’t fooling around – he trained his children to use weapons, and to hunt and kill dangerous creatures. And we learn that Sam’s decision to go to college led to a rift with their father, who saw Sam’s choice to leave akin to abandoning him and Dean, Sam’s only family. Dean definitely comes across as the loyal, obedient son, while Sam is the rebel – although it’s a touch ironic to me that Sam’s rebellion (going to college, seeking an education, law school goals) is what most parents dream of for their children.

So where is Dad? Well, as Dean tells Sam in front of Jessica, he’s on a hunting trip and hasn’t been back in a few days. Sam senses that it’s serious enough that he agrees to go to look for their dad, just for the weekend – he has an interview for a law school on Monday and promises Jessica that he’ll be back.

I will admit that while watching, I found some of the dialogue to be a bit clunky, with a lot of exposition, but I understand the need to set the scene fairly quickly in a pilot episode.

Also, I noticed that Dean has the Samulet on from the very first episode! I loved seeing that.

We begin to get into a bit of the ‘Monster of the Week’ portion of the show. The boys suspect their father was hunting something, and it turns out to be a spirit known as a Woman in White. Spirits, according to the lore, are borne out of violent deaths. We see her kill a young man, Troy, telling him that she can never go home (which had me wondering if this was a connection somewhat to Sam and Dean – can they ever truly go home?). I thought that this was a pretty cool first monster for the series. It’s kind of creepy but not overly so, and not gory. Some of my favourite episodes are the ones with ghosts/spirits.

I also loved seeing Dean’s terrible/ridiculous eating habits make an appearance in this episode (his road food from the gas station), as well as the classic description from Sam of Dean’s taste in music as the best of mullet rock! And of course, the Impala, Dean’s precious car, which is almost another character on the show. We see so many glimpses here of things that will remain fairly constant over the series (the car, the music, the impersonation of various law enforcement personnel using mostly classic rock aliases). It was very heartwarming!

By the midpoint of the episode, I was already buying Sam and Dean as brothers. Has there ever been better chemistry between two actors??? Jared Padalecki and Jensen Ackles perfectly convey the relationship between siblings: the bickering and the snark, but the affection and bond that comes from a shared history.

During the scene in the diner, where they’re interviewing Troy’s girlfriend and a friend of hers, who tells them about the legend of the ghost, Constance Welch, I wondered if that would have been something that flashed through Troy’s mind when he realized what was happening to him.

Things I love seeing change over the course of this series: Sam’s hair and cellphone technology. Something that has stayed the same: the generic web browser they use!

There are some classic moments here (“Jerk.” “Bitch.”) and I loved it. You know what else made me happy? Seeing John Winchester’s journal! The first time I saw that thing, I thought it was just so cool! In later seasons, we don’t see it much, which makes sense, but I loved seeing it make its debut.

Ultimately, the boys put Constance’s spirit to rest (well…I’m not so sure about that part…but they at least stop her from continuing to haunt and kill people), and as Sam returns home, he witnesses Jessica suffer the same fate as his mother, and Dean rescues him from a burning house, which brings it all full circle.

This was a great introductory episode. I think it establishes the tone of the series fairly well, and with the great dynamic between Jared Padalecki and Jensen Ackles, the brotherly bond is already apparent. This is an excellent origin story! I’m so excited to see the next episode (again).

-Spirits: borne out of a violent death; tend not to have moved on after they’ve died because of some sort of unfinished business