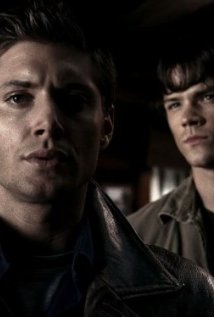 Sam and Dean make a stop at Blackwater Ridge and end up helping a young woman and her brother find their other brother, who mysteriously disappeared, while on a camping trip, in the woods.

There are two things that I know I am excited to see in this episode: an old Nintendo DS, and Callum Keith Rennie as Roy (Ok so I guess that’s one thing and one actor)!

Also, I see now that Cory Monteith and David Walton are in this episode. It’s funny to see that there are so many actors who’ve been on this show.

I recall reading somewhere that creator and then-show runner and writer Eric Kripke was notoriously not happy with the appearance of the wendigo, so I’m looking forward to getting a look at that at the end of the episode.

So the episode gets going with an attack on some guys camping. This is definitely one of the reasons that I don’t camp.

Then we transition to a scene confirming that Sam is still feeling guilty over Jess’s death. I’m glad to see that her death is continuing to affect Sam and wasn’t quickly dismissed after the pilot episode.

While speculating over what could be hunting campers out there, Sam and Dean mention black dogs. Could this be a reference to hell hounds? They also reference skinwalkers, which has me wondering if they mean shapeshifters. I like getting glimpses of these early parts of the lore.

This is definitely setting up to be a Monster of the Week episode, but I want to see if it does much to advance the larger story involving their father. I guess it does, at least by establishing that John Winchester is not lost or trapped in these woods.

OMG we get the classic line from Dean: “Saving people. Hunting things. The family business” (jump to 1:35 in the clip below to experience it for yourself).

I WANT THAT ON A T-SHIRT.

But seriously, what I love about this quote, and the scene it’s taken from, is that it provides a reason for Sam and Dean to go on beyond the outcome of the search for their father. It gives them more to do, another reason to be out there on the road, and a reason that serves the greater good (helping people).

I have to admit that I’m not loving the music being used in these chase/action scenes, e.g. Roy running into the woods. It just doesn’t feel like it fits the show. It sounds a bit too goofy or something.

[While Sam and Dean were discussing wendigos and declaring their gun useless, my husband commented that only one gun is ever really effective on this show – the Colt, of course. Guns tend to be pretty ineffective weapons against the supernatural, with the exception of silver bullets and rock salt rounds on certain creatures/spirits]

We see towards the end of the episode that Sam and Dean are quite willing to risk their lives, perhaps even sacrifice them, to save each other.

While the Monster of the Week storyline was okay, the effects were kind of meh, so this was not necessarily the strongest early episode. However, it it did contain some classic dialogue.

-Wendigo: used to be human, but turn into this creature after being so hungry that they become cannibals. They can keep their victims alive for long periods of time. As seen in the beginning of this episode, they can move incredibly quickly. Can be killed with fire; guns are useless against them.