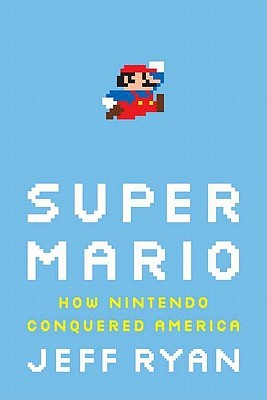 Published by Portfolio on August 9, 2011

Nintendo has continually set the standard for video-game innovation in America, and the saga of Mario, the portly plumber who became the most successful franchise in gaming history, has plot twists worthy of a video game. Lawsuits, Hollywood, fans and face-offs with Sony and Microsoft are all part of the drama. Find out about Mario's eccentric yet brilliant creator, the approach that allowed Nintendo to reinvent itself as the gaming system for non-gamers, and more. Even those who can't tell a Koopa from Goomba will find this a fascinating story of striving, comeuppance and redemption.

I received a free, advance copy of this book from the publisher by way of a giveaway through this year’s Mario Marathon (which is a very excellent charitable endeavour and is also a lot of fun to watch! The players live-stream themselves playing every Mario console game online, hour after hour, with donations from viewers ‘unlocking’ the levels they’ll play. Every cent goes towards Childs Play, which provides toys and games for children in hospitals. They played over 100 hours and raised over $100,000 this year!).

Anyone who knows me knows how much I love Nintendo. This book appealed to me right away!

This book was such a fun read. I loved reading about the history of the company and the people who ran it. There was a surprising amount of drama!

It was very interesting to read about the beginning of the home video game era. My parents bought the original NES one Christmas, but I was, of course, a child and not remotely aware of the cut-throat tactics and dramatic failures and successes of the companies that were all trying to get a slice of the pie.

I loved reading about this early history, because it was all new information to me: the number and variety of home game systems that were all put into the market at the same time, leading to a  glut of over-priced, sub-par systems and games, flooding the market, and Nintendo’s rise above it all.

Of course, the author does not paint Nintendo in any sort of saintly, all-pure light. For example, its tactics with third-party game developers make it seem like a bully, who knows that it can get whatever it wants because it has all the power. The book provides a history, showing the good and the bad, and the way Nintendo was able to learn from mistakes (their own, and those of competitors) to keep itself a major player (haha, no pun intended) in the industry.

The book covers the arcade era all the way to the present Nintendo Wii/Sony Playstation/Microsoft XBox rivalries. As someone with a Playstation 3 and a Nintendo Wii (and Nintendo DSi) in the house, these later chapters were of particular interest. I am from a die-hard Nintendo family, while Mr. Pingwing is pure Playstation. These chapters opened my eyes to the way that Sony and Microsoft seem to be going after a completely different market than Nintendo – hard-core, male gamers interested in first-person shooters and online multi-player games, vs casual, all-age gamers.

This is probably my personal bias, since I am not a casual gamer, nor am I a teenage boy, but I think that Nintendo has some excellent titles that appeal to more serious gamers than its competition would think. Just because a game isn’t a first-person horror-survival game doesn’t mean it can’t have an excellent story, good graphics, excellent music, and still appeal to serious gamers (I think more recent Mario games like Galaxy and Galaxy 2 are fun for casual gamers as well as those looking for more of a challenge). And I would also like to point out that ‘serious gamers’ include females! But I have become a bit side-tracked here…

The book opened my eyes to the crises that the company has faced over the years, and the way it has managed to endure, doing things its own way. It really was a trailblazer in this industry, thanks to those who have been, in one way or another, at the helm over the years: then-President Hiroshi Yamauchi; his son-in-law Minoru Arakawa; then-head engineer Gunpei Yokoi; and creator/designer/director/producer/etc., Shigeru Miyamoto, among others.

This book is not all techno/business talk, though. It also highlights the creation and development of some of the company’s greatest characters, such as Mario (obviously) and Link – characters who have spawned two of the longest-running video game series (and which are clearly two of my favourites!). Reading about the way Miyamoto conceived of and then laboured to perfect these characters and the games they inhabit was so interesting, especially when it was happening at a time when no one else had done anything like what he came up with.

Overall, I loved this book! I couldn’t put it down, and really got a lot out of it. I don’t know that this will appeal to non-gamers, but I have to recommend it, just because I loved it so much!