This week’s pick is The Coldest Girl in Coldtown by Holly Black! 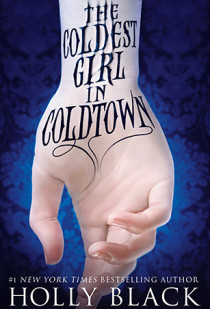 Tana lives in a world where walled cities called Coldtowns exist. In them, quarantined monsters and humans mingle in a decadently bloody mix of predator and prey. The only problem is, once you pass through Coldtown’s gates, you can never leave.

One morning, after a perfectly ordinary party, Tana wakes up surrounded by corpses. The only other survivors of this massacre are her exasperatingly endearing ex-boyfriend, infected and on the edge, and a mysterious boy burdened with a terrible secret. Shaken and determined, Tana enters a race against the clock to save the three of them the only way she knows how: by going straight to the wicked, opulent heart of Coldtown itself.

The Coldest Girl in Coldtown is a wholly original story of rage and revenge, of guilt and horror, and of love and loathing from bestselling and acclaimed author Holly Black.

This is definitely one of my most-anticipated books of 2013! I love the title, I love the cover, and of course the summary sounds like this will be my kind of book!

Would you believe I’ve never actually read any of Holly Black’s books? Her Curse Worker series is definitely on my TBR list, though.

According to Goodreads, this will be coming out on September 3rd, and let me tell you, I will be getting my hands on it that same day!

Week In Review
Posted in: Blog, Waiting on Wednesday | 4 Comments
Previous
Next