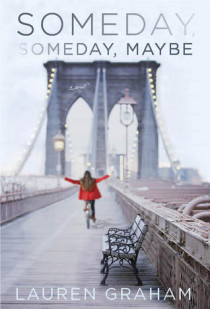 My pick this week is Lauren Graham’s Someday, Someday, Maybe. Here is the Goodreads summary:

Franny Banks is a struggling actress in New York City, with just six months left of the three year deadline she gave herself to succeed. But so far, all she has to show for her efforts is a single line in an ad for ugly Christmas sweaters and a degrading waitressing job. She lives in Brooklyn with two roommates-Jane, her best friend from college, and Dan, a sci-fi writer, who is very definitely not boyfriend material-and is struggling with her feelings for a suspiciously charming guy in her acting class, all while trying to find a hair-product cocktail that actually works. Meanwhile, she dreams of doing “important” work, but only ever seems to get auditions for dishwashing liquid and peanut butter commercials. It’s hard to tell if she’ll run out of time or money first, but either way, failure would mean facing the fact that she has absolutely no skills to make it in the real world. Her father wants her to come home and teach, her agent won’t call her back, and her classmate Penelope, who seems supportive, might just turn out to be her toughest competition yet. Someday, Someday, Maybe is a funny and charming debut about finding yourself, finding love, and, most difficult of all, finding an acting job.

I love, love, love Gilmore Girls (yes I know it’s done but I still talk about it in the present tense as though it’s on the air) and of course Lauren Graham. I’m so excited for this book, I think I pre-ordered the hard cover from Chapters like two months ago. Hard cover! That’s big $$$, folks. I have to have this book right away – can’t wait for a library copy.

The book is out later this month and I can’t wait to get my hands on it!