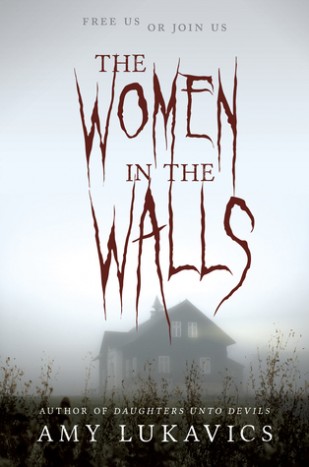 Today my pick is The Women in the Walls by Amy Lukavics, out September 27, 2016 from Harlequin Teen.

Lucy Acosta’s mother died when she was three. Growing up in a Victorian mansion in the middle of the woods with her cold, distant father, she explored the dark hallways of the estate with her cousin, Margaret. They’re inseparable—a family.

When her aunt Penelope, the only mother she’s ever known, tragically disappears while walking in the woods surrounding their estate, Lucy finds herself devastated and alone. Margaret has been spending a lot of time in the attic. She claims she can hear her dead mother’s voice whispering from the walls. Emotionally shut out by her father, Lucy watches helplessly as her cousin’s sanity slowly unravels. But when she begins hearing voices herself, Lucy finds herself confronting an ancient and deadly legacy that has marked the women in her family for generations.

I read and enjoyed Amy Lukavics’ Daughters Unto Devils last year, and have been eagerly waiting to see what she would write next! I love haunted house/ghost stories, and this one sounds really good and creepy. I can’t wait to check this one out!

Waiting On Wednesday
Posted in: Blog | Tagged: Waiting on Wednesday | 6 Comments
Previous
Next

6 Responses to Waiting on Wednesday