Why I Love…Over the Garden Wall

Why I Love… is a feature where I talk about the things I love – some bookish, some not – and why I love them. Today I’m talking about why I love Over the Garden Wall. 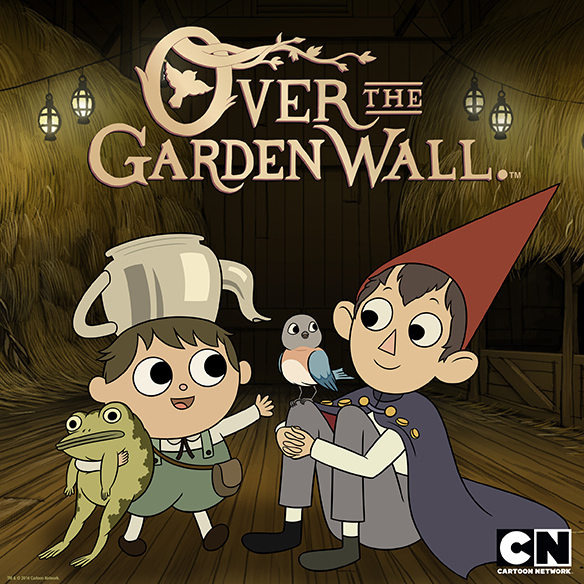 Over the Garden Wall is a ten episode miniseries that first aired on the Cartoon Network in November 2014, featuring the voices of Elijah Wood, Melanie Lynskey, and Christopher Lloyd, among others.

I don’t have the Cartoon Network and so no matter how much I really really really really really wanted to watch this, I figured it would be one of those things that I’d just never get to see. But thanks to the power of the internet (the episodes are available to purchase on iTunes), I was able to watch the series after all, and have recently rewatched it. I’ve also tried pushing it on my sisters and my husband.

Obviously I love this series. Both times that I’ve watched the full ten episode run, I’ve been left wanting more. I wish the soundtrack was available for purchase, and I wish there was a DVD release.

Anyway. The basic premise is that Wirt and his younger brother Greg are lost in  the woods – in the Unknown – and are trying to get home. They encounter various people/animals/creatures who may help or hinder them. There is also a larger menace, not always in the forefront but still a constant threat. Over the course of the ten episodes, we learn more about the characters and I loved the way this information was gradually revealed.

There are so many things to love about Over the Garden Wall: the characters,  the music, and the storytelling.

Wirt, the older brother, is anxious and initially, he doesn’t really look out for Greg as much as he should. He’s the more cautious, rule-following brother. Greg is the opposite of Wirt in many ways: Greg doesn’t overthink things, and doesn’t seem afraid of the Unknown. He’s funny and lighthearted, and often rushes into situations without realizing the danger. Guess which one I identified with…;)

I loved learning more about their relationship throughout each episode – as I’ve said numerous times before, I love sibling stories, and this is a great one!

Also, the music on this show is terrific! I love all of the songs. They’re catchy and some of them are really funny. I definitely wish the full soundtrack was available to buy. The music and songs fit each episode so well; for example, one of my favourites, The Highwayman, is a wonderful little song that comes off as both somewhat catchy but menacing, and is definitely memorable:

Even the show’s opening theme manages to capture the sense of magic and wonder that pervades the series:

Part of what I really love about Over the Garden Wall is the way it mixes humour with a darker story. How did Greg and Wirt get lost in the first place? Where is home? What is following them through the Unknown? The answers to these questions are revealed, some not until the final episode, and I loved watching it all unfold. There are some really fun, funny lighthearted moments, but there are occasionally some genuinely creepy or frightening moments, as well as sad and poignant ones. This show checks all my boxes.

I truly love stories that balance dark and creepy with funny and lighthearted, and somehow Over the Garden Wall does that perfectly. And at the same time, the story and its characters get under your skin and pluck at your heartstrings. I was incredibly emotionally invested in this series and in getting answers to my questions, finding out what had happened to Greg and Wirt and what was going to happen to them before it was all over…and I was pretty emotional at the end of the final episode.

I know that this is a cartoon, which may cause some people to write it off as childish or discount its potential to be stirring and moving, but I hope you don’t do that. I hope more people check it out and fall in love with it like I have.

This show is something that I can’t get out of my mind. I still think about it, analyzing it over and over, and I definitely want to rewatch it. And man, some of those songs are so catchy (Potatoes and Molasses)!

If you like stories that are kind of dark, kind of funny, kind of strange, and that will give you SO MANY FEELS, you’ve got to watch Over the Garden Wall!

Why I Love…Video Games
Posted in: Blog | Tagged: Over the Garden Wall, Why I Love... | Leave a comment
Previous
Next