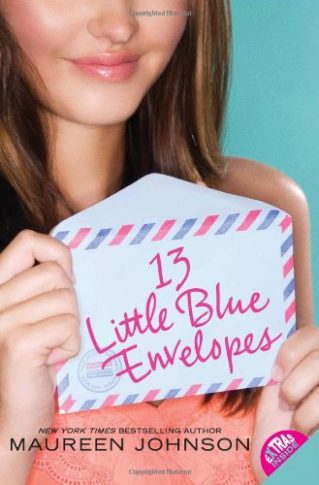 Published by HarperCollins Publishers on December 1, 2010

Inside little blue envelope 1 are $1,000 and instructions to buy a plane ticket.

In envelope 2 are directions to a specific London flat.

The note in envelope 3 tells Ginny: Find a starving artist.

Because of envelope 4, Ginny and a playwright/thief/ bloke about town called Keith go to Scotland together, with somewhat disastrous though utterly romantic results. But will she ever see him again?

Everything about Ginny will change this summer, and it's all because of the 13 little blue envelopes.

This was a fun, quirky  novel.

Ginny’s deceased aunt Peg, an artist, left her 13 little numbered  envelopes, with instructions that Ginny is to travel throughout Europe using the contents of each envelope as a guide. There are rules, such as ‘No guidebooks’ and ‘No electronic crutches’, and Ginny is not supposed to open an envelope until she has completed the previous envelope’s task.

Along the way, Ginny encounters Richard, who was Peg’s rommate in London, and a guy named Keith, for whom she develops romantic feelings, and who travels to Paris and Scotland with her. The envelopes take her from London to Scotland, Copenhagen, Amsterdam, Rome, Corfu (not in that order)…definitely a whirlwind!

Ginny is a shy, quiet young girl who is initially apprehensive about the whole ordeal, but she begins to find it exciting. At times, though, she is frustrated with her aunt’s sometimes-murky instructions and motives, sad that Peg is not around to talk to.

Aunt Peg was a bit of a wild child, and had a habit of disappearing. It turns out that Ginny did not know that her aunt had cancer until she had already died. Throughout the trip, Ginny struggles with her feelings of loss due to her aunt’s death, and has a difficult time accepting that she is really gone. She is grateful, in the end, because she learns a lot about herself along the way – things she may not have discovered if she had stayed in New Jersey hanging out with her best friend, Miriam.

Ginny meets some interesting people along the way, such as the family in Amsterdam who help her out when she can’t get a room at the hostel, and the artist in Denmark who lives in a house boat. I wish that the author had spent a bit more time on these parts of the story, since I found the people that Ginny met on her trip to be pretty interesting and would have liked to have read more about those parts of her trip.

Also in Denmark, Ginny meets Emmett, Bennett, Nigel and Carrie, Australian students travelling together. They follow the last envelope with Ginny to Greece, with her aunt explaining in envelope #12 that the final envelope will explain things and that she can open that one whenever she is ready. However, while out for a swim in the ocean, Ginny and Carrie’s backpacks are  stolen, with the final envelope still in Ginny’s bag.

Ginny turns to Richard for help getting back to London, and on the way back to his apartment, he reveals that he and Peg had been married before she died, making him Ginny’s uncle. Ginny is shocked and runs away to Keith’s place, but he helps her to realize that she should go back and talk to Richard. When she returns to the apartment, she discovers a key hidden in Peg’s room – which leads to a series of Peg’s paintings, which…well, I’d better stop there. I can’t give everything away I guess!

Overall, this was a fun read and I really liked the premise. I liked Ginny – she was nice, polite, shy, quiet, and nervous to be travelling abroad alone – she reminded me a bit of myself, and I could definitely understand her apprehension in the early part of the novel. The trip changes her, though, and I think it made her bold and not so scared to take chances. For example, while she had feelings for Keith, and they shared some romantic moments, she didn’t know how he felt about her. By the end, when she has decided that she has to return home, she is brave enough to ask him about his feelings. She also begins to accept the reality of her aunt’s death, which was very difficult for her, but she knew she had to do it.

While I liked the premise and most of the characters, I just felt that the book was a bit rushed at times. I know that Ginny’s trip was very much a whirlwind adventure, but I really would have liked to read more about some of the places she visited and people she met. I was missing that connection to her experiences, perhaps because they were all so hurried.

On the whole, though, I liked this book. It made for a nice, quick summer read, and there is a sequel dealing with the final missing envelope that I am definitely adding to my TBR. I recommend this if you’re looking for a quick, pleasant summer read.