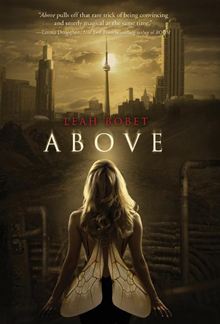 Matthew has loved Ariel from the moment he found her in the tunnels, her blond hair shining and her bee’s wings falling away. They live in Safe, an underground refuge for those fleeing the city Above--as does Whisper, who speaks to ghosts, and Jack Flash, who can shoot lightning from his fingers.

But one terrifying night, an old enemy invades Safe with an army of shadows and only Matthew, Ariel, and a few friends escape Above. Forced to survive in the most dangerous place he can imagine, Matthew strives to unravel the mystery of the shadows' powers and Safe's own secret history. For he knows he must find a way to remake Safe--not just for himself and his friends, but for Ariel, who's again faced with a life she fled, and who needs him more than ever before.

I heard (read?) a lot about this book in the last couple of months, through various blogs/book sites that I follow. I was excited to read it, initially.

I have very mixed feelings about this book. I was really looking forward to reading it, and urban fantasy is a new genre for me, so I was eager to try something a bit new. However, I just had such a hard time getting into this one, and that really disappointed me, since I was so excited to read this that it never occurred to me that I might not like it.

I think the idea is intriguing: Matthew is part of a group of people living underground, in a place known as Safe. They each have some sort of ability or physical characteristic that sets them apart from ‘normals’ ‘Above’  in the city, call themselves Freak, and have banded together to survive away from the Whitecoats (doctors) who they fear would harm them. For example, Matthew has scales down his back, Ariel grows wings and turns into a bee, and Whisper can hear and speak with ghosts. Some, like Matthew, can ‘pass’ (go Above and look and act ‘Normal’, because whatever makes them different, like Matthew’s scales, can be hidden), which means they are the ones to go up on supply runs.

I liked that there was no attempt to try to explain why the characters were the way they were – it’s just the way it is, very matter-of-fact that Jack has electricity running through him or that Atticus has crab claws.

So the premise really drew me in. But as soon as I started to read, I knew that I would struggle to get through this one, because the voice used by Matthew, who narrates the story, was so difficult to follow. I understand the logic behind writing him this way (he was born in Safe, so had no formal education or schooling, and therefore it wouldn’t make sense for him to have perfect English), but it felt so convoluted or stylized, and I found myself reading and then re-reading passages just to try to understand what Matthew was saying. While there were some beautiful passages, and while Matthew’s narration paints a picture, I also found that constantly trying to understand him really took me out of the story, and that frustrates me to no end. I just felt like I was missing something because I was always trying to understand what our narrator was saying.

However, if you can get past the style in which it’s written, you will see that the book addresses some topics that you might not expect to find in a YA novel. While they may not be a huge part of the story, the way the author revealed certain things about the characters at various points in the novel took me by surprise and made me see things a bit differently, and shed some light on hardships experienced by the characters (things such as gender, race, mental health issues).  All of those living in Safe have been mistreated, abused, abandoned by people who are supposed to protect them, such as family or the health care system. Despite my difficulty with the writing style, I enjoyed reading about each character’s background and learning more about how and why he/she came to Safe.

Another thing that I struggled with was Matthew’s love for Ariel. For most of the novel, I just couldn’t understand why he loved her so much and would risk so much for her, especially since it seemed that she didn’t reciprocate his feelings or affection. Towards the end of the book, I gained a better understanding of Ariel, but for the most part, I was annoyed by her constant running away and Matthew’s persistence in chasing her.

The book is set in Toronto, and as a Canadian, it always puts a little smile on my face to read about places I know and have really been to.

Despite my misgivings, I would recommend this book, if you are interested in urban fantasy and not put off by the writing style. The story is good, there is some action towards the end, and it addresses some very interesting topics, but be warned that this may not be an easy read (which, of course, does not mean that it isn’t worth reading – just that it took me by surprise).

On a final note, I would like to mention that this is the 100th book reviewed on Pingwing’s Bookshelf! I can’t wait to read and review the next hundred!