Amelia Anne is Dead and Gone 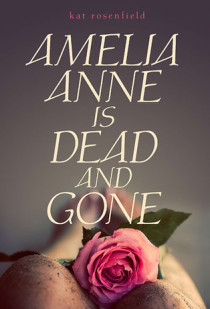 This book has been on my TBR for so long, and I finally borrowed a copy from the library. Here is the Goodreads summary:

Becca has always longed to break free from her small, backwater hometown. But the discovery of an unidentified dead girl on the side of a dirt road sends the town – and Becca – into a tailspin. Unable to make sense of the violence of the outside world creeping into her backyard, Becca finds herself retreating inward, paralyzed from moving forward for the first time in her life.

Short chapters detailing the last days of Amelia Anne Richardson’s life are intercut with Becca’s own summer as the parallel stories of two young women struggling with self-identity and relationships on the edge twist the reader closer and closer to the truth about Amelia’s death.

When the story begins, Becca has graduated high school and is getting ready to leave her small town at the end of the summer to go to college. Then her boyfriend sort of breaks up with her after they have sex in the back of his truck, and she’s hurt and confused. Then the next day, the dead body of Amelia Anne is found on the side of the road, setting off the town into gossip and speculation.

As the days unfold, Becca finds that she can’t stop thinking about the dead girl, who hasn’t yet been identified, and she tries to put the pieces together about what happened to Amelia Anne.

Interspersed are chapters showing Amelia Anne’s final days of life, and that’s the part of the book that really got me. She was a young woman on the brink of the rest of her life, about to embark on an exciting path, far different from the one she thought she’d had planned out for her. She was just looking forward to her future so much that I had this knot in my stomach reading about it, about her optimism, because of course I knew how things would turn out for her.

This was not a detective story – Becca didn’t consciously set out to solve a murder mystery and apprehend a killer or anything, but she was affected by the death of this girl she didn’t even know, murdered in her town. As this was happening, Becca’s resolve to get out of her small town wavered, and her on-again relationship with her boyfriend confused her even more. Did she want out anymore? What did her future hold? What about the people she would leave behind?

This was a bleak book, to be honest, but an intriguing story that captivated me. I thought it was well-written,  I liked the way the story was told, and I was so wrapped up in the mystery of who Amelia Anne was and how she died.

By the end, when the truth was out and Amelia Anne’s final moments revealed, I felt a bit exhausted, like I had been caught up in everything with Becca and could finally relax. There were a lot of flashbacks, and at times I was a bit confused because the timeline of the story jumped around so much, but Rosenfield found a way to bring it all back together and connect past and present.

I would definitely recommend this book to people who are looking for a gritty, contemporary YA read.