Blog Tour: All the Feels by Danika Stone 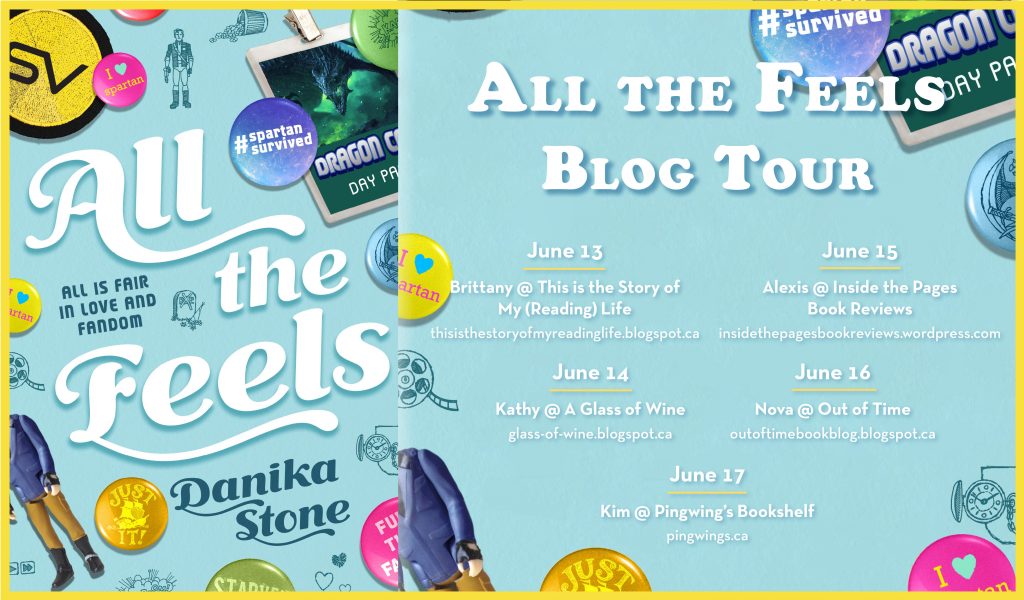 Hi guys! Today I am super excited to be participating in the blog tour for Danika Stone’s All the Feels, which totally sounds like my kind of book! Check out the synopsis:

College freshman Liv is more than just a fangirl: The Starveil movies are her life… So, when her favorite character, Captain Matt Spartan, is killed off at the end of the last movie, Liv Just. Can’t. Deal.

Tired of sitting in her room sobbing, Liv decides to launch an online campaign to bring her beloved hero back to life. With the help of her best friend, Xander, actor and steampunk cosplayer extraordinaire, she creates #SpartanSurvived, a campaign to ignite the fandom. But as her online life succeeds beyond her wildest dreams, Liv is forced to balance that with the pressures of school, her mother’s disapproval, and her (mostly nonexistent and entirely traumatic) romantic life. A trip to DragonCon with Xander might be exactly what she needs to figure out what she really wants.

I love fandom! And I love reading about people who love something so much. I’m reading All the Feels right now and loving it!

Read on for author Danika Stone’s guest post entitled Bi-Erasure and Breaking the Mold, and then check out the great giveaway courtesy of Danika and Raincoast Books!

Bi-Erasure and Breaking the Mold

When I began writing All the Feels, I knew the story wouldn’t fit into a neat little niche. It was a fandom-focused book, with two admittedly oddball characters on a quest to bring a fictional person back from the dead. I knew it might have an uphill battle finding its way onto mainstream shelves and the chances that it would capture the attention of anyone outside of fandom was iffy. But I had a plot just begging to be written and I’ve always believed in following your gut.

Boy am I glad I did!

One of the most amazing things that has happened in the time since All the Feels headed out into the world is hearing how positively the unique elements of the story have been embraced. The diversity of the book—in particular, the bisexuality of Xander Hall, Liv’s best friend—is something I’m grateful to see celebrated.

Xander is not your standard YA bad-boy hero. He isn’t athletic in the least. He’d rather sew costumes than drink. His idea of protecting his best friend is challenging someone to a duel… then running away since he clearly can’t fight. In many ways, I see Xander as the opposite to the testosterone-charged heroes that populate so many YA books. (A character trope I find worrying.) Instead, Xander is the drama kid, the outcast, the nerd. In other words, he’s real.

One important factor to Xander’s character is that his sexuality isn’t glossed over. He announces his gender identity proudly, and there’s no sense that Liv is “making him straight” – a phrase that disturbs me with its heteronormative connotations—when they begin to date. Instead, Xander is very much what so many people in the world are: bi-sexual. He embraces the fact that he falls mid-way on the spectrum. And this flexibility works to his advantage.

As a writer, I represent the world that surrounds me and that includes fighting the bi-erasure so common in media. When a character is only considered gay or straight, you’ve ignored the larger spectrum of sexuality (queer, asexual, bisexual, pan-sexual, etc.) that populates the world. I wanted Xander’s bisexuality to be a clear part of his identity, not an omission.

All the Feels provides an example of diversity in what is, so often, a narrow view of the world. By encouraging readers to embrace Xander, it allows them to consider other alternatives around them. And that, to me, is one of the best things about reading. So take the plunge, give All the Feels, and Xander and Liv, a try. 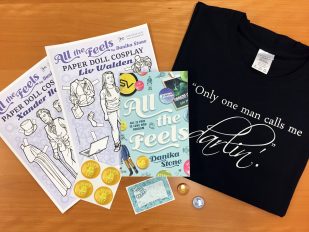 Enter to win this awesome prize pack, which includes a t-shirt, button, paper dolls, and a finished copy of All the Feels! And be sure to check out the rest of the blog tour!

Giveaway open to Canada only! Good luck!
a Rafflecopter giveaway

Pick up your copy of All the Feels: