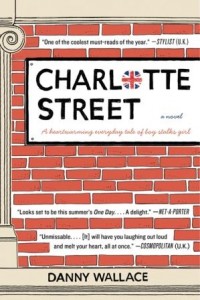 Jason Priestley (no, not that Jason Priestley) is in a rut. He gave up his teaching job to write snarky reviews of cheap restaurants for the free newspaper you take but don't read. He lives above a video-game store, between a Polish newsstand and that place that everyone thinks is a brothel but isn't. His most recent Facebook status is "Jason Priestley is... eating soup." Jason's beginning to think he needs a change.

So he uncharacteristically moves to help a girl on the street who's struggling with an armload of packages, and she smiles an incredible smile at him before her cab pulls away. What for a fleeting moment felt like a beginning is cruelly cut short—until Jason realizes that he's been left holding a disposable camera. And suddenly, with prodding and an almost certainly disastrous offer of assistance from his socially inept best friend Dev, a coincidence-based, half-joking idea—What if he could track this girl down based on the photos in her camera?—morphs into a full-fledged quest to find the woman of Jason's dreams.

I loved this book right away. Once Jason realized he still had The Girl’s camera and decided to develop the photos, turning it into a mission of sorts to track down the location of each photo and, he hopes, The Girl, I was hooked. I couldn’t wait to see how things turned out. Would he figure out who she was and track her down, or not?

Part of what drew me into the story was Jason’s talk of the ‘what if’ moment – haven’t we all experienced something like that, where you catch someone’s eye and wonder if they feel what you feel, if it really is a moment, or if they’re just looking past you at something? Jason’s determination to go with that feeling and the optimism and hope with which he begins his pursuit was very touching.

At the same time, Jason is dealing with the knowledge that his ex-girlfriend is engaged. While the relationship didn’t exactly end well, Jason tried to be mature at times – for example, accepting the invitation to her engagement part – but relationships and emotions can get messy and despite Jason’s good intentions, things with his ex-girlfriend and her new fiance didn’t exactly go smoothly, and I really felt for Jason.

I really liked the characters. I must admit, as a major video game fan, I liked Dev as soon as he appeared on the page! He was funny, and encouraged Jason to pursue The Girl and her photos. Jason’s adventure leads him some interesting people, including Matt, a former student, and  a young woman named Abbey.  They become a part of Jason’s life and their stories become part of his story. I really enjoyed seeing the way it all came together. And of course, I liked Jason. He was not what I would call an unreliable narrator, but he was not always forthcoming, which certainly made for an interesting, occasionally unpredictable, read.

I think part of what resonated with me was that so much of it felt real – Jason comparing his life to those of people on Facebook, feeling like everyone else is growing up and moving on while he is stuck or drifting, wondering what’s next. Who hasn’t felt that way? And it wasn’t just Jason – we get glimpses of this in the lives of Abbey, Dev, his co-worker Zoe, and others. Everyone was going through something, no matter how put together they appeared to everyone else. I could really identify with that.

Have I mentioned how funny this book was? I laughed out loud so many times, and kept telling my husband how funny it was, that now he is going to read it!

I really am happy that I had the opportunity to read this book, because I absolutely loved its optimism and humour, and once I started reading it, I couldn’t put it down! I definitely recommend this one.