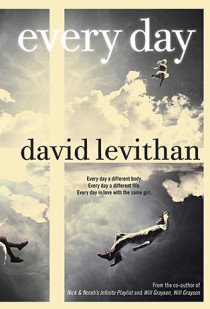 I’ve read and enjoyed a few of David Levithan’s books, and had been hearing pretty good things about this one. Plus, the plot sounded so different. Here is the Goodreads summary:

There’s never any warning about where it will be or who it will be. A has made peace with that, even established guidelines by which to live: Never get too attached. Avoid being noticed. Do not interfere.

It’s all fine until the morning that A wakes up in the body of Justin and meets Justin’s girlfriend, Rhiannon. From that moment, the rules by which A has been living no longer apply. Because finally A has found someone he wants to be with—day in, day out, day after day.

This was a really ambitious, intriguing, interesting read. A main character who is always in a new body, every day? I had my doubts about whether or not this would work for me, but I loved this book.

All is going along as usual in A’s world – he tries to do no harm or damage to the body he’s in, tries not to do anything to mess up the person’s life – but when he is in the body of Justin and meets his girlfriend, Rhiannon, everything changes. Suddenly he wants to be with her and to have her know who he really is.

This book covers a lot of ground – A inhabits the bodies of teenagers of all genders, sexuality, sizes, backgrounds – and it was really interesting. I’ve seen reviews that comment that they found the book too preachy, and I’ll agree that at times the book felt pretty Message-heavy, but that’s part of what I liked about it. To A, love is love, people are people.

There was a really interesting subplot involving Nathan, someone who remembers that A was in his body, and believes he was possessed by the devil. He reaches out to A by e-mail, wanting to know who he is and what he wants. I liked this because it gave A a different way of looking at things.

I really wanted to know the hows and whys of A’s life, but I tried to read past that and just enjoy the book as it was, not really expecting an explanation for it. I feel like this is a really difficult book to talk about it, but I’m not really sure why. Maybe it’s just that it was so different.

It wasn’t perfect, though. I was, at times, frustrated with the lengths A was willing to go to – what he was risking in these bodies’ lives – to see and be with Rihannon, but at the same time I tried to look at it as part of the story. A hadn’t been able to have a relationship as himself until Rihannon came along, and clearly even that was not easy. There was also another aspect in the book that I really wish had been explored more SPOILER ALERT: the idea that there were others like A out there, and that it might be possible to stay more than a single day in the same body. This raised so many questions for me and I was, in the end, so much more interested in that than in A’s relationship with Rihannon, but I was disappointed not to get to learn more about it all. END SPOILER.

Overall, though, I really liked this book and I’m so glad I finally got to read it!