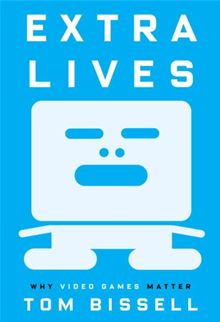 Tom Bissell is a prizewinning writer who published three widely acclaimed books before the age of thirty-four. He is also an obsessive gamer who has spent untold hours in front of his various video game consoles, playing titles such as Far Cry 2, Left 4 Dead, BioShock, and Oblivion for, literally, days. If you are reading this flap copy, the same thing can probably be said of you, or of someone you know.

Until recently, Bissell was somewhat reluctant to admit to his passion for games. In this, he is not alone. Millions of adults spend hours every week playing video games, and the industry itself now reliably outearns Hollywood. But the wider culture seems to regard video games as, at best, well designed if mindless entertainment.

Extra Lives is an impassioned defense of this assailed and misunderstood art form. Bissell argues that we are in a golden age of gaming—but he also believes games could be even better. He offers a fascinating and often hilarious critique of the ways video games dazzle and, just as often, frustrate. Along the way, we get firsthand portraits of some of the best minds (Jonathan Blow, Clint Hocking, Cliff Bleszinski, Peter Molyneux) at work in video game design today, as well as a shattering and deeply moving final chapter that describes, in searing detail, Bissell’s descent into the world of Grand Theft Auto IV, a game whose themes mirror his own increasingly self-destructive compulsions.

I love video games: playing them, watching others play them, watching TV shows about them, and reading game reviews (and about games in general). I have wanted to read this book for a while, and finally the time came.

This was an intriguing read. I have never stopped to think about whether or not video games are art, because as long as I enjoy the game, that’s all that matters to me. I don’t try to ascribe a higher purpose or meaning to it.

So, this book raised some ideas that were very new to me, and as interesting as I found them, I was at times frustrated by aspects of this book.

As much as the author professes to love video games, he also seems ashamed of his affection for games. While this feeds into a larger question  examined in the book, it annoyed me because I don’t feel ashamed of my love for games. I recognize that video games are not for everyone – people like what they like – but I don’t really care if someone thinks they’re dumb or silly or childish or anything else that detractors might say. I like the games I play, I have fun, and if other people aren’t into them, it doesn’t bother me.  The author spends a lot of time defending video games, and I found myself wondering why it mattered to him so much. Certainly the arguments that can be made against video games are not new, and with the money the industry makes and the rise in casual gaming, the industry is in no danger of disappearing.

The book is largely autobiographical, and the author is not holding out his experiences as representative of all gamers’ experiences, so I suppose I have to cut him some slack if he mentions a gaming experience where he felt ashamed or embarassed of his gaming in nearly every chapter – if that’s how he felt, then so be it. I just got a little tired of reading about that. I wanted to ask him why he plays if he’s so ashamed of it.

My own gaming experience is very different from Bissell’s. While I’m familiar with all of the games he mentions throughout the book, I haven’t played the majority of them. They’re very different from the kinds of games I prefer (RPG over FPS), and so the examinations of story and gameplay mechanics and experiences relating to these games were really fun to read, since it was (mostly) new for me.

This is mainly a book about console games and most of the games discussed are of the FPS genre (although there is a chapter discussing Braid, an indie platformer/puzzler) . I would have liked a wider examination of game types, but as I said, this is quite autobiographical, and if he didn’t play the kinds of games that I prefer, so be it.

I also had an issue with the writing. It was, at times, so contrived – lots of big words and complicated sentence structures, which gave me the impression that the author was trying to show off in some effort to demonstrate that he’s ‘above’ video games even while he defended his playing.

However, there were some topics touched on throughout the book that I found interesting and would have liked to read about even more. For example, he dicusses the violence in games (mostly relegated to the FPS – first person shooter), the emphasis on ‘realism’ in games and what that means, and the state of writing and story in games.

I also enjoyed the interviews sprinkled throughout the book with various game industry figures, such as Cliff Bleszinski and Peter Molyneux, and really liked the peek behind the curtain of how they work on games.

In the end, this seemed less of a book about why video games matter in a wider sense, and more related to why they matter to the author. There were a lot of questions raised about games, and it certainly made me think about games and what they are to me, and perhaps that’s the best the book can do: it can make you ask yourself why they matter (or don’t) to you, the reader. I found that I didn’t really care, by the end, what the author concluded, because I already knew that they mattered to me.

I realize that this post is a little all over the map, but that’s how I feel about this book. I liked some things about it, and I didn’t like others. If you aren’t into games, I don’t really know that this book would hold out much appeal for you, but if you have even a passing interest in video games, I think this is a fair book about the state of games and the gaming industry as it is now (or as close as can be, since, as the author rightfully points out, the technology changes so quickly that it’s difficult to capture the current state of things without running the risk of being out of date almost immediately).