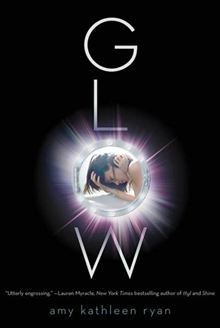 What if you were bound for a new world, about to pledge your life to someone you'd been promised to since birth, and one unexpected violent attack made survival—not love—the issue?

Out in the murky nebula lurks an unseen enemy: the New Horizon. On its way to populate a distant planet in the wake of Earth's collapse, the ship's crew has been unable to conceive a generation to continue its mission. They need young girls desperately, or their zealous leader's efforts will fail. Onboard their sister ship, the Empyrean, the unsuspecting families don't know an attack is being mounted that could claim the most important among them...

Fifteen-year-old Waverly is part of the first generation to be successfully conceived in deep space; she was born on the Empyrean, and the large farming vessel is all she knows. Her concerns are those of any teenager—until Kieran Alden proposes to her. The handsome captain-to-be has everything Waverly could ever want in a husband, and with the pressure to start having children, everyone is sure he's the best choice. Except for Waverly, who wants more from life than marriage—and is secretly intrigued by the shy, darkly brilliant Seth.

But when the Empyrean faces sudden attack by their assumed allies, they quickly find out that the enemies aren't all from the outside.

I’d read about this on a couple of blogs and it sounded like my kind of book. I was really looking forward to reading it!

I’m happy to report that I loved this book. I loved the setting – I don’t think I’ve read a book set in space before, so that was totally new for me, and as the book went on, the setting itself became a threat and gave a sense of danger to the book.

I liked both main characters, Waverly and Kieran. Waverly was tough and strong-willed, and not afraid to speak her mind. Although she knew she was expected to marry Kieran, she still questioned her own feelings about that, and made up her own mind. By the end of the book, she had become a strong , kick-ass leader.

Kieran was also likeable, but very different from Waverly. He is not as sure of himself or confident as Waverly is, and by the end of the book, they have seemingly gone in two very different directions.

I really liked the way that this book played with my expectations. Right when I thought something was predictable, someone would do or say something that I didn’t expect, and it was so refreshing. For example, while Kieran and Waverly are the main characters and we know they are a couple, they spend the majority of the novel separated, and encounter very different dangers.

I was also pleased with the way the story made certain characters seem to be villains, but then had me questioning who was really good/bad. There seemed to be a lot of grey, as opposed to clear-cut black or white areas. Similarly, as I saw the way that information has been controlled, manipulated and/or withheld by certain characters throughout the events of the novel, I would again find myself questioning who the good and bad guys really were.

There is a love triangle in this book, between Kieran, Waverly, and Seth (another boy aboard the Empyrean), and again, here I found my expectations being challenged. When Seth was introduced, I thought he was shy and kind. He reminded me of Peeta from The Hunger Games (I just love Peeta). However, throughout the course of the novel, Seth, just like the majority of characters in this book, did things that I didn’t expect of the typical pining boy in a YA love triangle, and I found myself questioning my earlier opinion of him. I really thought that this gave his character some depth and fleshed him out so that he wasn’t just some boy crushing on Waverly.

This book also touches on questions of faith, which I enjoy reading about. For example, the members of the New Horizon ship are very spiritual, whereas most of those aboard the Empyrean are not. While Waverly and the girls are aboard the New Horizon, I really liked seeing the contrast between the way people on each ship lived their lives, and the role faith played (or not) on each ship. I also thought the author presented a balanced look at each side, rather than making one seem right and the other seem wrong (despite the way it may seem at first).

I haven’t even really touched on the plot! I thought the story itself was exciting, with enough twists to keep me intrigued and reading late into the night, but not so twisty as to make me roll my eyes. The whole idea of kidnapping the girls in order to populate the new planet is so creepy and terrifying, and again, right when I thought I had things sorted out as to who was good and bad and what everyone’s reasons and motivations were for their actions, I found myself surprised.

Clearly, I loved this book, and I can’t wait to read the second book in this series. I think this is an excellent example of what good YA fiction can do: it can ask big questions, tackle big subjects, and refuse to provide easy answers or guarantee a happy ending. This is a must read!