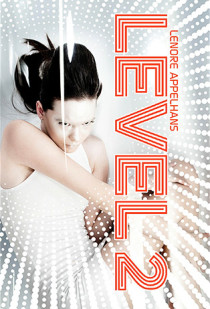 I really wanted to read this when it first came out, so I bought the e-book and then promptly forgot that I had it! Doh! Anyway, after a bit of a break from e-reading (working on my always-growing stack of library books), I came back to my Kobo and discovered that I had this book ready to go! Yay!

Three levels. Two loves. One choice. Debut novelist, Lenore Appelhans has written a thrilling otherworldly young adult novel about a place that exists between our world (Level 1) and what comes after life (Level 2).

‘I pause to look around the hive – all the podlike chambers are lit up as the drones shoot up on memories … I’ve wanted to get out of here before, but now the tight quarters start to choke me. There has to be more to death than this.’

Felicia Ward is dead. Trapped in a stark white afterlife limbo, she spends endless days replaying memories, of her family, friends, boyfriend … and of the guy who broke her heart. The guy who has just broken into Level 2 to find her.

Felicia learns that a rebellion is brewing, and it seems she is the key. Suspended between heaven and earth, she must make a choice. Between two worlds, two lives and two loves.

I was sooooo intrigued by the idea of a YA story about life after death. As the summary says, Level 1 is our world – our life on Earth – and Level 2 is what comes after, where we meet our main character Felicia. She spends her time with other girls her age – called drones – plugged into pods reliving their own memories (or the memories of others) via the net. Felicia’s story hints at a troubled past, problems with her parents and her best friend Autumn, but also reveals a boyfriend, Neil. I liked the way the story went back and forth between Felicia’s memories of Earth, and her present. She has no idea how much time has passed since she died (and the nature of her death is not revealed until the end of the book), nor does she know whether Neil is still alive or somewhere up in Level 2.

One day, a boy named Julian shows up in Felicia’s hive, and not only does she know him from when she was alive, but he basically tells her everything in Level 2 is messed up and they’re busting out (there’s more to it but I don’t want to spoil it). Or something. To be honest, I was pretty confused at times about Morati, angels, drones, the net, etc. I found myself having to go back and reread passages to make sure I followed everything.

I must say that while the summary above plays up a love triangle, I really didn’t find that one existed. Sure, Julian and Felicia had a history, but she seemed pretty certain that she only wanted Neil, and while Julian may have made feelings for her, I didn’t get the sense that she felt the same way back. And you know what? I am perfectly happy without a love triangle. There was enough going on in this book to keep me entertained already, so while some people may go into this expecting a love triangle and Felicia struggling to choose between two guys, I don’t think they’ll find it here (although this is the first in a series, so who knows? Maybe the love triangle will pop up and intensify in the next book).

I liked Felicia most of the time, although she was occasionally a little too whiny or self-pitying for me, but Julian was not as easily likeable. I guess I just didn’t get much sense of who he really was, and perhaps that was intentional – he is pretty mysterious – but it didn’t give me any strong feelings towards him. There were other characters introduced – other rebels up in Level 2 – who I would have liked to learn more about. Other than Felicia, I didn’t feel like I got to know anything about the people she encounters in Level 2.

Part of that is because it is through her own memories that the reader gets to know Felicia, while we don’t really have that sort of access to the other characters (although Felicia does access others’ memories occasionally).

I wish I could talk about one aspect without spoiling things, but I think all I can safely say is that something is revealed towards the end about someone and as I looked back at the book, I could see how it was subtly worked into the rest of the story, and I thought it was really well done.

The final part of the book dragged for me, although it isn’t a long book. There was some walking from one place to another, talking about doing one thing then agreeing to do something else, etc. There were interesting parts but I suppose I just wanted to read more of those parts. And then suddenly, it was over. I really felt like the book ended way too soon, or at least too abruptly.

Although the world-building was a little confusing at times and I didn’t feel too attached to anyone other than Felicia, I liked this book. The idea behind it was just so different, and I do want to read more about Felicia and her journey.

All things considered, I will definitely be picking up the next book because I simply have to know what comes next – Level 3?!