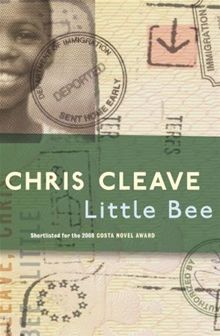 This is the story of two women. Their lives collide one fateful day, and one of them has to make a terrible choice, the kind of choice we hope you never have to face. Two years later, they meet again - the story starts there ...

This book was on my TBR for some time, and I finally picked it up and read it.

This was a good read. The story is told using alternating first-person perspective, starting with Little Bee, and then Sarah. The novel begins with Little Bee, a Nigerian refugee, at a British immigration centre, where we learn she has stayed for two years. Little Bee is about 16 years old, and reading about her life in the detention centre is sad – when she first arrived, she spent the entire time looking for ways to kill herself, in case ‘the men’ show up. Eventually, Little Bee learns to speak  English while in the centre, as she has been told that she must either be pretty or speak well. Eventually, Little Bee is released from the centre with three other girls, but realizes that she has nowhere to go and only knows two people in England. She has an old business card in her belongings, and calls the number. The man on the other end, Andrew,  is not happy to hear from her, and when she tells him that she’s coming to see him, he begs her not to.

Although she is not sure at first why she is being released, Little Bee learns that one of the girls has done sexual favours for a guard in order to secure her own release, along with a handful of other girls, so that it looks less suspicious. Once Little Bee realizes that she is not legally in the country and does not have papers, she becomes worried. Little Bee splits from the other girls that night, and makes her way to Andrew’s.

Meanwhile, Andrew’s wife, Sarah, is coping with his death. We learn that Andrew has committed suicide, leaving Sarah to raise their young son, Charlie, alone. Sarah is a magazine editor, and while it sounds as though she initially wanted to do some good with her magazine, it seems to have become one of the typical women’s magazines, with a focus on sex, fashion, and beauty. We also learn that Sarah has been having an affair with a man named Lawrence, and that this affair has gone on for a number of years. The morning of Andrew’s funeral, Sarah answers the door and finds Little Bee on the other side.

Over the course of the novel, we learn about that encounter on the beach, when Sarah, Little Bee, and Andrew meet. It is a terrible, horrifying experience for all involved, and it sheds some light on Andrew’s suicide, his relationship with Sarah, the death of Little Bee’s sister, and Little Bee’s fear of being discovered in England and deported back to Nigeria.

I don’t want to say anything more about the plot – I recommend that you read this for yourself and find out what happens next. Although there was a lot of sadness in the novel, it is all balanced by Little Bee’s optimism and hope.  The chapters that are told by Little Bee are the best ones. Despite what she has experienced, her voice is so positive and uplifting, and there are some beautiful passages in these chapters.

On the other hand, Sarah comes across, intially, as not very likable. She is having an affair, and despite his recent susicide, does not seem to mourn her husband’s death. I think what redeemed her in my eyes, in the early chapters, is her love for her son, Charlie. It becomes clear that she loves him very much and would do anything for him.

As we read more about their shared experience, I learned more about Sarah and did come to like her. It was just such a stark contrast at first between Little Bee’s goodness and optimism, and Sarah’s sadness and weariness. I think that while Little Bee may have embodied the struggles and challenges of refugees, Sarah reflected the day to day life of someone in the Western world: she knows that there are bad things happening in other parts of the world, but until she is face to face with Little Bee on her doorstep, she is not really troubled by these things and does not think about them.

While the book explores aspects of politics and globalisation, it is not a political book. I hope that if you read it, it will make you think about these things though. What is our place in an increasingly smaller world? What responsibility do we owe to others, especially when they arrive in a new country asking for help?

Apparently a film version is in the works with Nicole Kidman. I’m very curious to see what they do with this book, but I urge you to read the book before you see any movie adaptation.

I am really glad that I finally got around to reading this book, and I definitely recommend it.