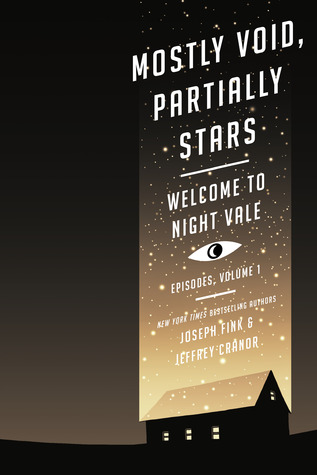 Published by Harper Perennial
on September 6, 2016

From the authors of the New York Times bestselling novelWelcome to Night Vale and the creators of the #1 international podcast of the same name, comes a collection of episodes from Season One of their hit podcast, featuring an introduction by the authors, behind-the-scenes commentary, and original illustrations.

In June of 2012, the creators of Welcome to Night Vale began airing twice-weekly podcasts. By the anniversary show a year later, the fanbase had exploded, vaulting the podcast into the #1 spot on iTunes. Since then, its popularity has grown by epic proportions, hitting more than 100 million downloads, and Night Vale has expanded to a successful live multi-cast international touring stage show and a New York Timesbestselling novel. Now the first two seasons are available as books, offering an entertaining reading experience and a valuable reference guide to past episodes.

Mostly Void, Partially Stars introduces us to Night Vale, a town in the American Southwest where every conspiracy theory is true, and to the strange but friendly people who live there.

Mostly Void, Partially Stars is an absolute must-have whether you’re a fan of the podcast or discovering for the first time the wonderful world of Night Vale.

I’m a big fan of the Welcome to Night Vale podcast. I love the mix of humour and horror elements (my favourite podcast episodes are always the creepier ones). I have the novel that came out last year, as well as two awesome framed posters. I even got to see a live show a couple of years ago when they came to Ottawa.

So when I heard that there were two books coming out this year that were the scripts of the episodes from the podcast, I pre-ordered right away! Mostly Void, Partially Stars has episodes from the first year of the podcast. What’s great about the book is that each episode comes with an introduction usually by either Joseph Fink or Jeffrey Cranor, but occasionally someone else involved in the podcast, like Cecil Baldwin (Cecil), Dylan Marron (Carlos), or Kevin R. Free (Kevin). There is also some really cool artwork in the book.

Reading this book was so fun! It was like a bookish version of comfort food. I can definitely see myself turning back to this book to read some of my favourite episodes again. Some of my favourite episodes are from this first season (especially episode 2, Glow Cloud), and going back to them was so fun! My husband and I even took turns reading a couple of episodes out loud with each other, which was awesome and fun and cool. I’m really looking forward to reading book two, The Great Glowing Coils of the Universe, which is already on my bookshelf.

Of course I highly recommend Mostly Void, Partially Stars, especially to fans of the podcast, but if you haven’t listened to this show yet, you must! Start here with the very first episode. Turn on your radio and hide.