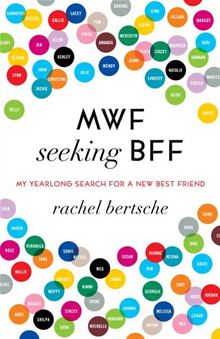 Published by Ballantine Books on December 20, 2011

When Rachel Bertsche first moves to Chicago, she’s thrilled to finally share a zip code with her boyfriend. But shortly after getting married, she realizes that her new life is missing one thing: friends. Sure, she has plenty of BFFs—in New York and San Francisco and Boston and Washington, D.C. Still, in her adopted hometown, there’s no one to call at the last minute for girl talk over brunch or a reality-TV marathon over a bottle of wine. Taking matters into her own hands, Bertsche develops a plan: Meeting people everywhere from improv class to friend rental websites, she'll go on fifty-two friend-dates, one per week for a year, in hopes of meeting her new Best Friend Forever.

This book caught my eye a couple of months ago but I didn’t pick it up (electronically) until last week.

This was a pretty interesting book. While Rachel and her husband had friends, she was missing that BFF connection in her new-ish city of Chicago, and so she decides to find one. The idea of going on friend-dates was so strange to me at first, but by the end of the book, after Rachel has gone on 52 friend dates and encountered so many women who were looking for the same thing, it seemed less unusual. Rachel’s story made it clear that she was not the only one out looking for a friend.

I moved to Ottawa almost ten (!) years ago for school, didn’t know anyone,  and had to make new friends, so I could understand what it’s like when you’re trying to make friends. However, as Rachel points out in her book, it’s easier to make friends when you’re young and the basic requirements for a new friend are that you live in the same residence/take a class together/are new to the city and thrown together with a bunch of other new transplants. I was fascinated by the way she just threw herself entirely into the search for a new friend, losing most of her embarrassment over the course of the year. She certainly seemed more confident and outgoing by the midway point. I have to admit, I don’t know that I could have done what she does. Somehow, while it’s very normal in our society for a woman to go out with the sole purpose to meet a man, it’s a bit of a shock for one to go out with the intention of making a girl friend.

Rachel is likable. She isn’t nutty or strange, she’s just at that age where it’s more difficult to make friends than it was when we were younger. Without the common bonds of adolescence, school, or camp, where do you go just to make a new friend? She was brave enough to try things like cooking classes, posting a personal ad, and even a rent-a-friend service. It was really interesting to see the services that are out there for people looking for a connection.

Rachel includes some facts and figures in with her story, and much of the research see has done into sociology and friendship is intriguing because I can see its application in real life in my own relationships, such as the different categories of friends and the types of connections we seek from those categories.

While this book didn’t make me want to run out and make new friends, it really made me think about my own friendships and my role and behaviour as a friend, and realize that I can be a better friend. Sometimes I get so caught up in my own interests, which are for the most part solo (reading, playing video games), that I neglect the important people in my life. I want to reach out more to the great people who are in my life, and as I read this book, that’s exactly what I did. Rachel’s story highlights the importance of connection with someone other than our boy/girlfriend/spouse. There is something about a female friendship that a romantic relationship can’t match.

This book, thankfully, doesn’t really delve into touchy-feely or new-agey territory. While Rachel is looking for a friend that she can talk to about serious things like her relationship with her husband and her grief at losing her father, she is also looking for someone she can gossip with about books and celebrities. Does she find that by the end of her year-long search? You’ll have to read to find out, but I would recommend this book if you like non-fiction.