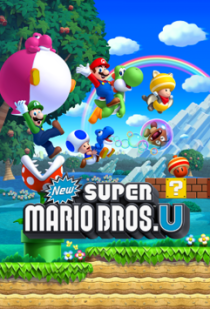 I’ve been playing this game since it came out in November 2012, and finally decided to post my review. Although I got the Wii U when it was released around the same time, I’m not up to reviewing the console yet, although that will probably come later.

I was so excited for this game. I’d heard that it combined elements of my two favourite Mario games, Super Mario 3 for NES and Super Mario World for the Super Nintendo. To me, that meant great power ups, a world map that builds as you go, Yoshi, Koopalings, a bonus world post-main game, and hours upon hours of gameplay, with major replayability. Well, thankfully, I was not disappointed!

The story is never the main draw of a side-scrolling Mario game, but I thought this one at least had a tiny twist on what I expected: rather than kidnapping Princess Peach, Bowser and his Koopalings take over her castle, with the airship hovering above it. Mario, Luigi, and the toads are thrown far, far away, and it’s your job to get Mario back to Peach’s castle and kick Bowser out.

As in past games, the Koopalings spread out on the map, with one Koopaling serving as the boss to each area. I loved the return of the Koopalings! They’re all so wacky and I have such fond memories of tromping them in Mario 3, and I loved doing it again here!

My favourite aspect of this game is the world map. Not only is it huge, but you can scroll over the whole thing at any time from the map screen, letting you see just how far you have to go. The pathways build as you go, so while you can see the whole map from the start of the game, you can’t necessarily see each level and how to get to them. Of course, there are multiple pathways thanks to the secret exits and hidden levels in the game. I love secret exits! Some were so tricky to find, but I was so pleased every time I found one on my own. I refused to move on to the next world until I found all of the levels and got all three star coins hidden within each level. This required much replaying of some levels, but I felt a major sense of accomplishment once I succeeded!

The different worlds on the map were pretty standard and predictable: grass/plains, desert, water, ice, fire/lava, poison/forest, and sky/cloud. Each world has a mini-fortress halfway through, and a castle at the end where a Koopaling waits for you. There are hidden levels that appear on the map once you find a secret exit in certain levels, and I loved watching the map expand as I played.

I was also excited that Yoshi made an appearance in this game, although I was disappointed that I couldn’t take him from one level to another – you can only use him in the levels where he’s encountered. There are three baby Yoshis, though, who can be carried from level to level (although if you lose the baby Yoshi or die in the level, you have to wait a while for them to reappear on the map screen). The pink baby Yoshi can be used to float and glide; the yellow baby Yoshi can light up dark levels, stunning enemies; and the blue baby Yoshi can use bubbles for various purposes. My personal favourite is the pink Yoshi! You’ll need to use all of them in different ways to obtain some of the trickier star coins.

Something new in this game is the appearance of Nabbit, a weird purple rabbit-looking thing who appears in a level once per world, steals an item from Toad and has to be caught in a certain amount of time. If you catch him, you get a nice item from Toad. If you fail, you can keep trying until you catch him.

As for power ups, the usual ones return, with a new one added to the mix: fire flower, ice flower, mushroom, star, and an acorn, which turns Mario into a flying squirrel. Using the acorn, Mario can glide and cling to walls for a little bit, which comes in handy. I loved the flying squirrel suit! Tiny spoiler: Some other items can be found in the bonus world that is unlocked after you beat the main game (if you get all the star coins in a given world, you unlock a corresponding level in the bonus world). I haven’t beat all of the bonus levels yet – they’re soooo tough!!! – but so far, I’ve found a propeller hat and a penguin suit.End of tiny spoiler.

The assist block also reappears in this game (if you die a certain number of times in a level, you can use the assist block to call on Luigi to show you how to get to the end). I’m not ashamed to say I made use of this every now and then, particularly in some of the fortresses.

I loved the graphics in this game. For the first time, Mario was in high-def, which looked beautiful on my television. Even the backgrounds, which can sometimes feel a bit stale, were nice to look at. Some levels, like Spinning Star Sky and Painted Swampland, were beautiful! The sound and music were what I’ve come to expect from a Mario game: nothing new and exciting, but familiar and comforting.

Because this is a game for a new system,  I should talk about the new controller. Although the game can be played using both the standard Wii remote and the Wii U tablet-style remote with the screen built in, I have only played it using the Wii U remote. I love it! Despite its size, it was very comfortable to hold and play, and the ability to use the off-tv play came in really handy when my husband decided he’d had enough of watching me die in certain levels over and over *cough*Flight of the Para Beetles*cough* and wanted to watch television. The Wii U remote has its own speakers, so if you’re playing the game on the tv, you could turn the volume off of the remote (as I did), but when you’re playing on the remote’s screen using the off-tv play, you can turn the volume up on the remote so you can still hear everything (as I did).

I think the difficulty level of this game is just right. If you’re new to Mario, you can definitely ease into the game, but if you’re a pro, you can work on challenges like finding hidden levels, getting all star coins, and beating the bonus world. If you need more of a challenge, this game has some extras that can be accessed from the main menu where you can try things like speed run challenges, endurance-style challenges, and more. I’ve only tried a few of them, but they’re pretty fun.

There is also a multi-player aspect to this game, but as I haven’t tried it yet, I won’t comment!

One of my favourite things about this game is its use of the Wii U’s Miiverse (sort of like Facebook for the Wii U). When it’s turned on for this game, you can choose to show posts from other players on the game map. You’ll see player comments, drawings, and be able to ask for or provide tips and hints. You can mark a post as a spoiler so as not to ruin things for other players, and I have to admit I called on other players to help me a few times! It’s a much nicer, more social way of getting help when you’re stumped, compared to searching FAQs and walkthroughs online, and I would love to see that implemented in future games.

Although it isn’t perfect, I obviously love this game. The map is huge (although I always wish there were more levels!), the controls are intuitive, and the game is pure fun, which matters to me above all else when it comes to video games. I bought the game five months ago and still play it, and I definitely recommend it!