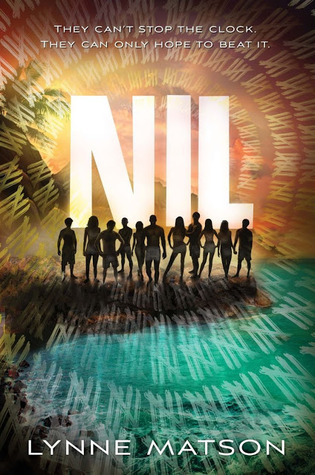 On the mysterious island of Nil, the rules are set. You have exactly 365 days to escape—or you die.

Seventeen-year-old Charley doesn’t know the rules. She doesn’t even know where she is. The last thing she remembers is blacking out, and when she wakes up, she’s naked in an empty rock field.

Lost and alone, Charley finds no sign of other people until she meets Thad, the gorgeous leader of a clan of teenage refugees. Soon Charley learns that leaving the island is harder than she thought . . . and so is falling in love. With Thad’s time running out, Charley realizes that she has to find a way to beat the clock, and quickly.

I was so intrigued by this book. I loved the idea of a scary, mysterious, dangerous island (I loved the show Lost!), trying to survive while figuring out how they got there – and how to get out of this place.

Unfortunately, the romance really took centre stage, and that was the aspect of the story that I found the least interesting.The book started off great, with Charley somehow being zapped from a Target parking lot to the island. She finds herself naked and alone, and has to figure out how to survive. It turns out there are many dangers on the island: animals, poisonous plants, the sun during the day and the cold at night, staving off thirst and hunger…and once she meets up with Thad and the others from the City (where the islanders have gathered to try and live together and survive), she learns that if you don’t get yourself off the island in a year, you die. It was wonderfully creepy and tense.

I was hooked right away. I wanted to know more about the island, about how people had survived and what happened to those who’d come before. Unfortunately, I had to deal with the romance angle first. There was nothing unlikable about either Charley or Thad, and I could totally understand the idea of living with no regrets when your days are, literally, numbered. There was nothing about the romance that bothered me or upset me. It just wasn’t the element of the story that interested me the most.

The story was alternatively narrated by both Charley and Thad, and dual narration can be difficult to read in a book like this when I found there wasn’t much distinction between their narrative voices. It was a good device for getting to learn more about the characters, but their voices felt identical to me.

I have to point out something that I’ve seen other Canadian bloggers mention: Thad’s use of the expression ‘eh’. It was too much. It was overused and not always used properly! Every time he said ‘eh’ it irked me.

This book left me with so many questions. I had thought it was part of a series, but given the way the story ended, it seemed like a standalone. And I couldn’t see anything on Goodreads about a sequel or companion novel. Spoiler alert! What happened phsically to the people who didn’t get off the island and died? Like Thad wondered, do they just drop dead, or fade away, or experience pain? Also, was Rives’ theory about the solar flares correct? What was the deal with that girl Ramia? She seemed to have predicted much of what happened and so I thought I’d learn more about her, but I didn’t. And most pressing (to me): what was the purpose of the island? Why were people taken there and why did they die after 365 days if they couldn’t find a way off before then? End of spoilers.

I know that books don’t need to provide answers to every question they raise, but given the story,  I totally expected to learn more about the island. That said, I enjoyed the majority of the book, and would recommend it to readers looking for a story that combines suspense and mystery with a bit of a Lost-type vibe.