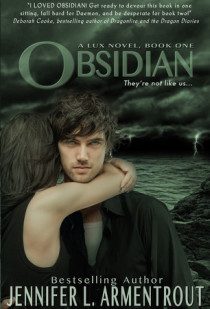 This is the first book in the Lux series. Here is the Goodreads summary:

When we moved to West Virginia right before my senior year, I’d pretty much resigned myself to thick accents, dodgy internet access, and a whole lot of boring…. until I spotted my hot neighbor, with his looming height and eerie green eyes. Things were looking up.

And then he opened his mouth.

Daemon is infuriating. Arrogant. Stab-worthy. We do not get along. At all. But when a stranger attacks me and Daemon literally freezes time with a wave of his hand, well, something…unexpected happens.

The hot alien living next door marks me.

You heard me. Alien. Turns out Daemon and his sister have a galaxy of enemies wanting to steal their abilities, and Daemon’s touch has me lit up like the Vegas Strip. The only way I’m getting out of this alive is by sticking close to Daemon until my alien mojo fades.

If I don’t kill him first, that is.

This was a fun book. It wasn’t great – the plot was slow at times, the writing clunky – but it was light, fun, and I liked the alien angle. It was different from what I’ve been reading lately.

Katy and her mother have moved into a small town, and live next door to Daemon and his sister, Dee. While Dee is friendly, Daemon is downright mean, seemingly doing all he can to keep Katy away from them. After Damon saves her from a man who attacks Katy in the library parking lot, he behaves even more cruelly towards her, and other people in town and at school seem to hate her on sight.

There were some things I didn’t like in this book. Daemon was an ass, he was downright controlling and manipulative, and it was really difficult for me to find anything about him attractive. He’s written as like the hottest guy Katy has laid her eyes on, but his behaviour was so awful. The story was also a bit slow. For a long time I kept wondering when the plot was going to kick in, and then realized Daemon and Katy’s relationship was the plot for a big chunk of the book. So at times, I was a bit bored.

However, there was a lot that I liked about this book. Dee was really nice, and I loved that Katy was a book blogger! I also liked the alien storyline, because that was new for me. The whole back story of where Daemon and Dee come from, what their abilities are, and why they need to keep who they are a secret, was pretty interesting. Katy was a likeable protagonist and she wasn’t an idiot (mostly): right away, she realized that something with Dee and Daemon was off. She also didn’t let Daemon get away with his shitty behaviour, calling him out on it every time.

Overall, this was a fun read and I’m definitely going to check out the sequel, Onyx.