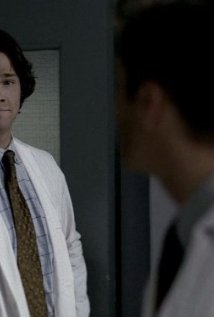 Having repaired the Impala, the brothers investigate a series of decapitations and cattle mutilations in Red Lodge, Montana, and find that the last victim was a vampire. They then run into vampire hunter Gordon Walker (Sterling K. Brown), who Ellen warns is dangerous. Sam is later captured by a group of vampires, and their leader Lenore (Amber Benson) reveals to him that they have reformed, feeding only on cattle. After being released unharmed, Sam tries, to no avail, to convince his brother that the vampires should be left alone. However, when they arrive at the vampire's hideout, they find that Gordon has already captured Lenore. They try to convince Gordon not to kill her, but he cuts Sam's arm to tempt the vampire. When Lenore resists the temptation, the brothers overpower him. As Dean ties Gordon up, Sam takes Lenore to safety. Dean later admits to Sam that he was wrong about the vampires.

Okay this episode opens on a girl running from something – she’s being chased and seems pretty freaked out. She doesn’t make it though – it seems like whoever or whatever is chasing her decapitates her.

Back in Black! The Impala is fixed, they’ve got a case, and there’s a good song playing – Dean is in a good mood.

They pose as press and talk to a local cop. They’ve found two severed heads recently. This sounds like Sam and Dean’s kind of thing. The brothers make a trip to the morgue to check out the bodies and the heads. When they check the mouth of one, they find vampire fangs! The victims aren’t humans, they’re vamps!

Later on, at a local bar, Sam and Dean chat up the bartender (Ty Olsson! Remember that face…). It looks like someone is trying to listen in on their conversation, and he follows the bros when they leave the bar. Of course, Sam and Dean aren’t stupid, and they know when they’re being followed. They get the jump on the guy, who turns out to be another hunter – Gordon Walker.

When Gordon hears their names, he tells them that he knows who they are and that he met their dad once – “Hell of a guy”. I love that the Winchesters have a reputation as hunters. So far, it seems like it’s more that John has a reputation, but Sam and Dean are definitely making a name for themselves!

Gordon confirms that he killed the two vampires. Dean wants to know where the nest is, but Gordon won’t tell them. He says he’ll finish it and he’s been on this job for a year. He’s a go-it-alone guy.  (But he tells them that he heard there’s a chupacabra two states over if they’re interested) He says he’ll buy them a drink on the flipside and leaves.

Cut to Gordon tracking and fighting another vampire, but things look bad for him. Luckily, Sam and Dean show up and save him. There’s a cool/gross scene where Dean cuts the vamp’s head off with a saw. Sam has worry face.

Over drinks later, Dean and Gordon seem to get along really well. Sam doesn’t seem so sure about Gordon though. And I love when Gordon calls him ‘Sammy’, and Sam replies that only Dean gets to call him that!

Gordon tells Sam to lighten up, have fun with the job. Dean thinks that Sam’s a buzzkill, and Sam leaves them and goes back to the motel alone.

Gordon and Dean start trading war stories, talking about how they’ve ’embraced the life’. Gordon’s origin story as a hunter involves his sister. He was home alone with her when he was 18 and a vampire got in and got to her. That was that. Gordon left home, became a hunter, looked for the vampire, and it became his first kill.

Dean talks to Gordon about his dad. He says that he can’t talk to Sam about it and he has to keep his game face on. But he confesses that he’s not handling it well. Gordon seems to understand and tells Dean to use those feelings as a hunter.

Meanwhile, Sam calls Ellen at the Roadhouse and asks about Gordon Walker. Does she know him? Ellen says yes, he’s a real good hunter. But when Sam tells her that they’ve run into him and are kind of working with him on a job, Ellen’s tone changes immediately. She tells Sam don’t work with Gordon – he’s dangerous. Let him handle the job and move on.

Back to Dean and Gordon. Gordon says he loves the hunter life because it’s all black and white. Find the bad thing and kill it. Simple. Says he and Dean were born to do this.

I love the introduction of Gordon Walker as a character because I think he represents the dark side of the kind of hunter that Dean can become if he lets his grief about John’s death overtake him.

Back at the motel, Sam is attacked and kidnapped by vampires! One is the bartender they spoke to earlier, Eli, and the other is a girl, Lenore. They tell Sam that they don’t kill humans or drink their blood. They aren’t like other vampires. They survive on cattle blood, and there’s no reason for hunters to come looking for them. Lenore and her crew are upset that their vamps are being hunted and killed, so they’re leaving town tonight. They ask Sam not to follow him, and they let him go, unharmed.

Gordon and Dean head back to the motel room, and Gordon talks to Dean about looking for the vamp nest. Sam comes in and wants to talk to Dean alone. He tells him to rethink this hunt. Sam has been to the nest but the vampires let him go. Sam implores Dean not to go after them because they don’t kill humans.

Of course, Dean is skeptical, and doesn’t believe him. He says their job is to kill supernatural creatures, but Sam argues that their job is hunting evil. And Sam tells Dean that Ellen said Gordon is bad news. He says that Gordon is a (poor) substitute for their father. They argue, and Dean punches Sam in the face!

Dean tells him that he’s going with Gordon to find the nest; however, when he gets back in the motel room, Gordon has already left – and taken the Impala’s keys. Sam wants to stop him, but Dean insists that they help Gordon.

We see Lenore and Eli packing up. Eli wants to stay and fight, saying it’s self-defense and they’d be within their rights. But Lenore insists that they leave, and Eli heads out to meet the others.

Gordon is out on his own, headed to the nest, with Sam and Dean after him. There is so much tension between the brothers!

Gordon busts into the nest and stabs Lenore with a knife coated in dead man’s blood, which we know is like poison to vampires. He’s torturing her when Sam and Dean show up. Gordon wants to know where the others are. He invites Dean to grab a knife and join in.

Sam wants to let her go, but Gordon points the knife at Sam. He tells them about the first vampire he tracked down and killed – it was his sister. He hunted her and killed her. She wasn’t human, wasn’t his sister anymore.

Gordon says the way Lenore and her crew live doesn’t change what they are. To prove his point, he feeds Lenore some of Sam’s blood. Gordon says they’re all the same, evil and bloodthirsty, when Lenore vamps out. But then she retracts her fangs, says no. Sam manages to get her out of there, leaving Dean and Gordon alone.

Dean tells Gordon that they have to talk. He points a gun at Gordon, saying that he’ll have to go through him to get to the vampires.

Dean knocks Gordon out and ties him up, telling him that he might be like Gordon, he might not, but Gordon’s the one tied up now.

The sun comes up and Dean is still keeping an eye on Gordon at the nest. Sam comes back, confirming that the vampires have left town. Gordon looks pissed!

Dean says they’ll call someone to untie him, in two or three days. Then he punches Gordon big time!

Outside, Dean tells Sam to punch him. Sam says no. Dean says that he shouldn’t have taken this job. It jacked everything up. And now he’s wondering, what if they killed things that didn’t need killing?

Sam and Dean were raised to hate supernatural creatures and to paint them all with the same brush: evil. Sam says that what matters is that they didn’t kill Lenore and the others.

I thought this was a great episode. As I said above, I love Gordon’s character. He represents a dark side of hunting: when you only see things in black or white, no shades of grey. And we’ve heard Dean talk this way in the past. If he lets his grief and hate take over, and pushes Sam away, might he end up like Gordon? Ruthless, dangerous, and sadistic?

This episode doesn’t move along the larger story yet – and in fact we aren’t sure what the overarching story will be this season – but I love what we see from Sam and Dean, the conflict between the two of them this episode.