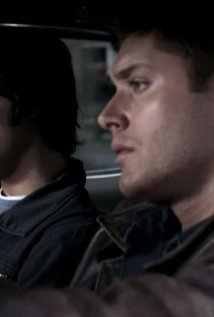 As a prank, teens spread the word that a local house is haunted by the ghost of Mordechai Murdoch, a man who reportedly killed his six daughters during the 1930s, and it ends up listed on the urban legend website Hell Hound's Lair. When it soon appears that the house actually is haunted, the brothers head to Richardson, Texas, to investigate, and run into paranormal investigators Ed Zeddmore and Harry Spengler (A. J. Buckley and Travis Wester), owners of the website. Although their research shows no truth in the legend, the brothers nevertheless encounter the spirit, but it is different from what the legend describes. When Sam and Dean realize that the Mordechai's origins on Hell Hound's Lair has also changed, they theorize that the spirit is actually a Tulpa brought on by a Tibetan spirit sigil painted by the teens as a joke, with the beliefs of the website's visitors causing the story to become reality. The brothers trick Ed and Harry into posting a vulnerability for Mordechai onto their website, and later return to the house to kill him. However, Ed and Harry are also there, and reveal that the website's server crashed. With the Tulpa unaffected, Dean decides to burn the house down to stop the entity.

I’m already mega excited for this episode because I know this is a Hell Hounds/Ghostfacers episode and I love them so much! This is their first appearance!

Anything that starts with teenagers venturing into an abandoned, supposedly haunted house never ends well. Come on you guys, this is not a good idea!

On their way to check out this possibly haunted house, we see Sam telling Dean that it was a mistake to let their dad leave. I think Dean’s right though: they are all each other’s weaknesses.

There is some EMF, but the power lines might be interfering. Interesting.

When they find the various symbols painted inside the house, Sam notes that the sigil of sulfur didn’t show up in San Fransisco until the 1960s.

Ed and Harry, paranormal investigators, are hilarious! They’re sassy and snarky and just awesome. I love Sam and Dean playing dumb with them. “EMF?”

As much as Sam and Dean have excellent chemistry, I feel like Ed and Harry have also made a fantastic team right from their first appearance!

Oh dear. Now more teenagers are going into the spooky house! This is not a good idea. And as we see, this time there really is a ghost. And it’s just like Craig / the ‘urban legend’ of Mordechai Murdoch says!

I do not understand the pressure of truth or dare. I think I said this about the Bloody Mary episode, too. If you don’t want to make out with that guy or go in the haunted house, don’t do either one! Who cares if your friends think you’re a chicken?? At least you didn’t kiss someone you don’t want to kiss or get killed by a ghost!

The police see it as a suicide, but Sam and Dean know better.

Ed and Harry are back! And this time, they all see Mordechai Murdoch! But the rock salt rounds in the shotgun have no effect. Sam asks what kind of spirit is immune to rock salt? Answer: a spirit that isn’t a spirit!

LOL Ed and Harry: “Would John Edwards go?”  “Sweet Lord of the Rings!”

Sam and Dean’s dynamic is so great by this point. Honestly, the chemistry between them is flawless. They’re so believable as brothers: the bickering, yes, but they love each other at the same time. This show really is a truly wonderful sibling story.

I have to say, all of this seems like a pretty elaborate ruse by Craig and his cousin.

Does Dean still have that leather jacket? I’m trying to remember the last time I saw it in a recent episode.

Hmm so Mordechai changes as the legend changes. As Sam and Dean note, ghosts are pretty strict. They follow the same patterns over and over. So again, Mordechai must not be a spirit. It turns out that he’s a tulpa: through concentrated meditative thought, a tulpa is a though-form that takes on a life of its own, once created.

Again, Ed and Harry bring the LOLs: “What would Buffy do?” “Ed, she’s stronger than me”.

Ed is clearly the leader, between him and Harry. And I just love the way Sam and Dean are playing them. “We’re just trying to get a book and movie deal, okay?”

Ed and Harry, when face to face with Mordechai: “The power of Christ compels you!”

So they can’t seem to get rid of this tulpa, and decide to burn the house down. Perhaps it isn’t a real solution that permanently gets rid of it, but it works for now. As Dean says, Mordechai “can’t haunt a house that doesn’t exist”.

And in the end, Sam and Dean pranked Ed and Harry pretty spectacularly. And then call a truce for their own prank war.

I love this episode! Monster of the Week episodes dealing with spirits and hauntings tend to be my favourites, and I love the twist that this is not actually a spirit they’re dealing with.

Even though this really does nothing for the larger storyline, I love this episode so much in large part because of Ed and Harry, the Ghostfacers (or, as they’re known in this episode, Hell Hounds). They’re two of my favourite characters, and every time they come back to the show, I’m happy. They crack me up, and I love the way they are a contrast to Sam and Dean.

-Tulpa: Tibetan thought-form. 10,000 web surfers (really, who uses that term??) = so many people believing in and focusing on something that, when combined with the Tibetan spirit sigil on the wall of the house, it takes form. Concentrated meditative thought.

-Spirits: we see again that you can use salt (salt rounds in shotguns) and iron against them