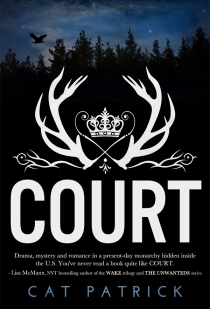 Hi guys, today I’m excited to share some information about the upcoming Court by Cat Patrick, courtesy of Rock Star PR & Literary Consulting! READ ON FOR DETAILS ABOUT THE BOOK, ALONG WITH AN EXCERPT AND A GIVEAWAY!

I’ve read and enjoyed some of Cat’s books in the past, and I’m currently reading an ARC of Court and enjoying it. I love the premise:

For more than 300 years, a secret monarchy has survived and thrived within the borders of the US, hiding in plain sight as the state known as Wyoming. But when the king is shot and his seventeen-year-old son, Haakon McHale, is told he will take the throne, becoming the eleventh ruler of the Kingdom of Eurus, the community that’s survived for centuries is pushed to the limit. Told through four perspectives, Court transplants us to a world that looks like ours, but isn’t. Gwendolyn Rose, daughter of the Duke of Coal, is grudgingly betrothed to Haakon — and just wants a way out. Alexander Oxendine, son of the Duke of Wind and Haakon’s lifelong best friend, already grapples with internal struggles when he’s assigned to guard Haakon after the king dies. And commoner Mary Doyle finds whispers in the woods that may solve — or destroy — everything, depending on your bloodline.

Doesn’t that sound fascinating? You can follow this link to add Court to your Goodreads: https://www.goodreads.com/book/show/23377533-court

Here are the release details, along with a purchase link and some information on Cat: 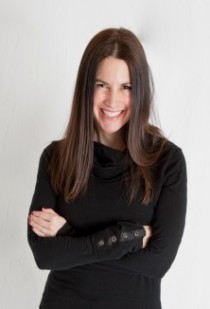 Raised in a house that was struck by lightning–twice–Cat Patrick is the author of young adult books Forgotten, Revived, and The Originals, and the co-author of Just Like Fate.

As a child, Cat could be found making up stories like her first book, Dolly the Purple Spotted Dolphin; growing corn in the backyard; or performing with a traveling sign-language troupe. She earned a journalism degree from the University of Wyoming and a master’s degree from Boston University, and worked in public relations for fifteen years. She lives outside of Seattle with her husband and twin daughters, and is on Twitter @seecatwrite, or Facebook at authorcatpatrick.

Here’s an excerpt from the book:

Before he was the enemy, James Haakon McHale III was just a seventeen-year-old in what most people knew as the state of Wyoming, wishing he was somewhere other than the predawn forest with a rifle in his grip.

“It’s colder than moonlight on a tombstone,” Haakon muttered, blowing on his fist. His thick-soled boots swish-thumped on the hard earth as he skillfully avoided twigs, rocks, and low branches.

Alexander Oxendine—youngest son of the Duke of Wind, wide receiver, video game button masher, and Haakon’s best friend—laughed into his collar. It could’ve been mistaken for a cough.

“It’s colder than a whore’s heart,” Alexander said, his tone cautiously low. They were the youngest members of the hunting party, and were only allowed to take part because of their rank. Haakon could think of a thousand superior privileges.

He glanced around to make sure none of the other men were paying attention—especially his father. Smirking, he said, “Colder than a polar bear’s balls.”

It was Haakon’s father: dictator, fun-spoiler, and—regrettably for his son—the tenth ruler of the Kingdom of Eurus, also known as the Realm, the monarchy hiding in plain sight in the depths of the Democracy known as the United States of America.

Every schoolchild knew the story. In 1670, after Joseph Dyer’s wife died in the Great Plague in London, he brought his five daughters to what would become the United States one hundred years later, seeking a better life. But it soon became apparent that his family would never thrive under strict Puritan rule in New England–which banned higher education for girls and taught submissiveness above all else, and which centered around extreme religious beliefs that were counter to Dyer’s own.

A friend, John Seymour, who was—controversially—married to a Native woman, suggested that they set out together in search of a new home deep within America’s treacherous unknown. Seymour’s wife had been attacked; her family persecuted. Seymour believed that rather than fighting the Natives, they should live in harmony with them.

Dyer, Seymour, and several other men and their families snuck away. After a long and dangerous journey, together they created their version of paradise: a kingdom that blended the best of England with Native cultures. Dyer was thought of as the Father of the Realm, and Seymour’s Native wife, who ensured their survival through tribal relations, the Mother.

Rather than cause a revolution, the founders decided to keep the kingdom secret. Inside the borders of what they’d eventually stake claim as Wyoming, they’d follow their own rules. Outsiders wouldn’t know they were different because they wouldn’t understand.

Outsiders weren’t to be trusted.

Dyer’s youngest daughter, captivated by the ancient Greek she wouldn’t have been allowed to learn in Puritan society, named the new kingdom Eurus, meaning east wind. She pronounced it “air-us.”

“But the winds here blow from the west,” Haakon had asked his father once—before Dad was King James. That was when it was okay to ask questions. When curiosity wasn’t an imposition.

“That’s right, Haakon,” his father had replied, straw between his teeth. They’d gone on a walk together. The sun was setting on an easy day. His dad had pointed toward the eastern horizon. “The wind here does primarily blow from the west, but our founders blew in from the east. That day, the wind changed directions.”

Haakon frowned away the memory of days never to return, and refocused on the trees. He walked as soundlessly as he could in his camo fleece jacket and vintage Levi’s, his rifle nestled in the crook of his left arm, a round in the chamber. He was on the left edge of the group, three rows behind his father. Evenly spaced gaps between them, the men were like migrating geese, locked in formation.

“Were you drinking last night?” Haakon’s father had demanded on the way to the meeting point that morning. “Is that why you’re so tired?”

“I’m tired because it’s so early that the birds aren’t even awake yet.”

“Good. Because you know what the consequences will be if you start drinking again.” They’d shared the backseat of the armored SUV; Haakon had done his best to preoccupy himself with his cell phone.

“You need to turn that thing off before we arrive. And when’s your next haircut? You look slovenly.”

Will you just get off my back? Haakon had thought at the top of his lungs. What he’d said, though, was simply, “Yes, sir.”

There, in the forest, Haakon toyed with the idea of raising his gun and shooting King James square in the back of the head. Right there under his hat, just above the rise of his custom down hunting vest. He could do it. Even with the others present, he knew there’d be no trial, no trip to Corby. But offing his father wouldn’t solve anything. In fact, it would make life a lot worse. Because with his father gone, Haakon would be in charge.

Haakon would become the King of Eurus.

The thought made him want to puke.

Good luck to those who enter! Let me know in the comments: have you read any of Cat’s other books? Have you read Court? If you entered the giveaway, which of her four earlier books are you most excited to read?

The Dark Side II: Highway of Horror 2015 Authors Tour
Posted in: Blog | Tagged: Promo post | Leave a comment
Previous
Next