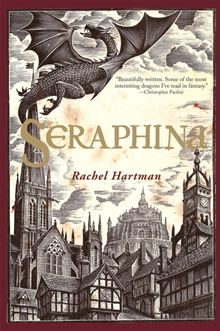 Published by Random House Books for Young Readers on July 10, 2012

Four decades of peace have done little to ease the mistrust between humans and dragons in the kingdom of Goredd. Folding themselves into human shape, dragons attend court as ambassadors, and lend their rational, mathematical minds to universities as scholars and teachers. As the treaty's anniversary draws near, however, tensions are high.

Seraphina Dombegh has reason to fear both sides. An unusually gifted musician, she joins the court just as a member of the royal family is murdered—in suspiciously draconian fashion. Seraphina is drawn into the investigation, partnering with the captain of the Queen's Guard, the dangerously perceptive Prince Lucian Kiggs. While they begin to uncover hints of a sinister plot to destroy the peace, Seraphina struggles to protect her own secret, the secret behind her musical gift, one so terrible that its discovery could mean her very life.

Oh my gosh,  I finally finished this book! I don’t usually take this long to read one book (I think I started this back in January!), but I kept getting distracted by other books that I wanted to read, and my stack of library books that were coming due demanded my attention. But anyway, I finally decided that I had to pick this book up again, and once I did, I finished it that same day.

I heard so many good things about this book when it was first coming out, and I wanted to read it because I like fantasy novels and DRAGONS! There is so much cool stuff about dragons in this book.

I loved Seraphina. She was funny and so likable, and I really felt for her, as she was constantly trying to hide a part of who she was. It took so much effort to keep that part of who she was a secret, and only her father and her uncle, Orma, know the truth.

When someone in the royal family is murdered, Seraphina ends up conducting her own investigation into the allegations that the killer was a dragon – which would definitely violate the peace treaty and lead to war. She is shortly joined by the prince, Kiggs, and their blossoming romance was sweet. Seraphina fights her feelings at first, but she clearly loves him, and it’s possible he may feel the same way. However, her strong opinions on dragons leads to some tense moments, as she is of course keeping a secret from Kiggs about herself, one that she dare not reveal to anyone: she’s half-dragon.

To complicate matters, Kiggs is to be married one day to Glisselda, the future queen and Seraphina’s music student. I really liked Glisselda! She was so funny, and I think she really cared about Seraphina. Although Kiggs may return Seraphina’s feelings, he has his royal duties to uphold, and so I found the romance between he and Seraphina bittersweet.

I also loved reading about the relationship between Seraphina and Orma, who is a dragon. Through him, she learns a lot about dragons, and her mother, who died in childbirth and who was Orma’s sister.

This book surprised me with its humour, perhaps because I expect fantasy novels to be so dense and serious. Even the cast of characters is funny! If you read this book, don’t skip that part!

This is the first in a series, and I think I know, in general, where the story is going to go in the second book and I’m really looking forward to it. I also appreciated that the main story here was wrapped up, although its larger implications will likely be explored in the sequel.

This book is long and there is a lot going on that I haven’t even touched on, because I wouldn’t know where to being and I want to avoid spoilers, and I did struggle a bit when I finally picked it up again and had to remember everything that had happened so far. It’s not necessarily a quick, easy read, but it’s so well-written and I really loved the characters. If you like YA/fantasy, I think this is a must-read!