Source: Borrowed from my BFF! 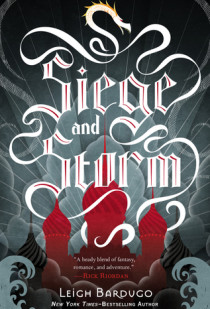 I’ve been looking forward to reading this book ever since I finished the first in the series, Shadow and Bone! Lucky for me, my wonderful BFF let me borrow her copy.

Hunted across the True Sea, haunted by the lives she took on the Fold, Alina must try to make a life with Mal in an unfamiliar land. She finds starting new is not easy while keeping her identity as the Sun Summoner a secret. She can’t outrun her past or her destiny for long.

The Darkling has emerged from the Shadow Fold with a terrifying new power and a dangerous plan that will test the very boundaries of the natural world. With the help of a notorious privateer, Alina returns to the country she abandoned, determined to fight the forces gathering against Ravka. But as her power grows, Alina slips deeper into the Darkling’s game of forbidden magic, and farther away from Mal. Somehow, she will have to choose between her country, her power, and the love she always thought would guide her–or risk losing everything to the oncoming storm.

Well I’m just going to come out and say it: I loved this book. I was drawn in from the very first page and happy to be caught back up in Alina’s story. The story begins with Mal and Alina in hiding following the events at the end of Shadow and Bone, but it isn’t long before they’re caught back up in the Darkling’s plot.

Speaking of the Darkling, I was really drawn to his character in the first book, but once I learned more about him, and after the events at the Fold, I am definitely not into him as a romantic interest for Alina! That said, I still find him a fascinating character, and although he wasn’t in the book as much as he was in Shadow and Bone, he did still pop up and each time, it seemed significant and majorly creepy!

And then we are introduced to Sturmhond. What can I say that hasn’t been said about him already? I love him! He was dashing, mysterious, funny, intelligent and cunning…what a great character! I loved what the introduction of his character brought to the story.

This story was exciting and unpredictable, and I loved that Alina was both drawn to her incredible power and also aware of the risk of losing herself to that power. I liked Alina in this book even more than I did in Shadow and Bone, perhaps because I am drawn to characters who aren’t necessarily clearly good or bad, e.g. the ‘good’ guys who make bad choices. I also love to read about a main character who isn’t perfect. Alina is not without flaws, and her struggle in this book with who she was, who she is, and who she could be was very compelling.

My heart broke for a couple of characters in this book: Genya, because I still felt for her despite her betrayal; and Mal, because he was trying to find his place in Alina’s world and not having a very good time of it. I’m so curious to see what happens with Mal and Alina in the next book. Although there was some flirtation between Alina and Sturmhond, I really do believe that she loves Mal, and I want to see them pull through whatever comes next.

And can we talk about that battle at the end? Holy cow! It was so exciting and frantic, and I loved it! It had me reading as quickly as I could, desperate to see what would happen next and who would make it out alive!

I loved this book so much and I totally recommend this series! Now the wait begins for the next book!