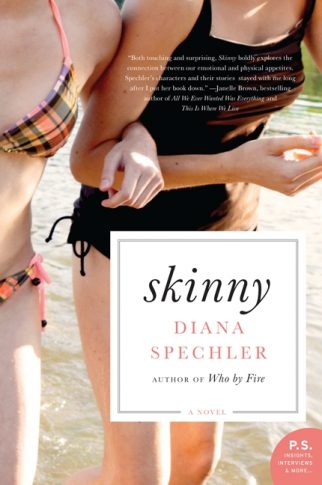 Published by Harper Perennial on April 26, 2011

After her father’s death, twenty-six-year-old Gray Lachmann finds herself compulsively eating. Desperate to stop bingeing, she abandons her life in New York City for a job at a southern weight-loss camp. There, caught among the warring egos of her devious co-counselor, Sheena; the self-aggrandizing camp director, Lewis; his attractive assistant, Bennett; and a throng of combative teenage campers, she is confronted by a captivating mystery: her teenage half-sister, Eden, whom Gray never knew existed. Now, while unraveling her father’s lies, Gray must tackle her own self-deceptions and take control of her body and her life.

Visceral, poignant, and often wickedly funny, Skinny illuminates a young woman’s struggle to make sense of the link between hunger and emotion, and to make peace with her demons, her body, and herself.

I was initially on the fence about whether or not I really liked this book and would recommend it. In the end, I’ve decided that, while I didn’t love this book, I think it’s well-written and interesting enough to recommend.

Gray Lachmann lives in New York with her comedian boyfriend, Mikey. She hasn’t spoken to her father in three years, following an argument about her relationship with Mikey and her father’s disapproval. After her father’s death, Gray, a thin calorie-counter, finds herself constantly binge-eating. She discovers a half-sister named Eden, who is attending a weight-loss camp for the summer. Gray decides to attend the camp as a counsellor, where she believes she will lose weight and tell Eden that they are sisters.

Gray was not always a likable character, which is often an issue for me when I read something, but as the novel progressed and I learned more about Gray, and  her relationship with her father, I feel  as though I came to understand her somewhat, and sympathize. Gray and I are roughly the same age (she’s 26, I just turned 28) and I identified with her on the struggles of figuring out who she is and what she wants in life.

I felt as though I understood Gray’s body image issues (to a point). Over the summer, as relationships at the camp develop and become complicated, Gray loses the fifteen pounds she’s put on and then some, and I liked reading about this. It highlighted, for me anyway, the connection Gray (and perhaps the rest of us) makes between food, eating, relationships, and emotions.

Without giving away the plot, I need to say that Gray does some things in this novel that I just did not agree with, and it made me a bit angry at her! But I think that this novel is really about Gray’s journey from one place in her life to the next, and while I don’t agree with some of these things, I think I see her reasons. She is a complicated girl who has not totally figured things out, and let’s be honest, who at 26 has it all figured out?

While I found this book to be a well-written, quick read, I didn’t love it. I did have a difficult time with Gray because she is so different from me and does things that I certainly wouldn’t have done myself, but after finishing the book and taking a day to think about it, I realize that not liking Gray made me work a bit harder to understand her, and I think Spechler has created a complicated character. Gray is funny, sad, vulnerable, has a hard time letting go of things, wants to please, wants to figure out who she is and what she wants…we are all like that at times, aren’t we? I think I need to stop deciding that just because I don’t identify with or even like a novel’s protagonist doesn’t mean the book is not good. Perhaps the author has written an unlikable character for a reason.

While Spechler included passages about Gray’s life back in New York and her relationship with Mikey, I wanted to read more about that. I found that more interesting than the weight loss camp.

This book was deeper and more complicated than I expected, which was a pleasant surprise. As you can probably tell from my review, it certainly gave me a lot to think about! I recommend this book if you’re looking for a smart, well-written book that will make you think.