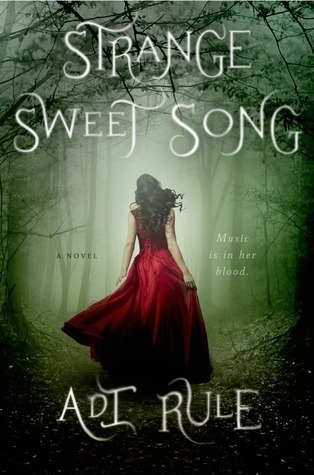 A young soprano enrolls in a remote music academy where nothing, not even her mysterious young vocal coach, is as it seems

Outside Dunhammond Conservatory, there lies a dark forest. And in the forest, they say, lives a great beast called the Felix. But Sing da Navelli never put much faith in the rumors and myths surrounding the school; music flows in her blood, and she is there to sing for real. This prestigious academy will finally give her the chance to prove her worth—not as the daughter of world-renowned musicians—but as an artist and leading lady in her own right.

Yet despite her best efforts, there seems to be something missing from her voice. Her doubts about her own talent are underscored by the fact that she is cast as the understudy in the school's production of her favorite opera, Angelique. Angelique was written at Dunhammond, and the legend says that the composer was inspired by forest surrounding the school, a place steeped in history, magic, and danger. But was it all a figment of his imagination, or are the fantastic figures in the opera more than imaginary?

Sing must work with the mysterious Apprentice Nathan Daysmoor as her vocal coach, who is both her harshest critic and staunchest advocate. But Nathan has secrets of his own, secrets that are entwined with the myths and legends surrounding Dunhammond, and the great creature they say lives there.

I really liked this book. I didn’t know anything about it going in, other than the synopsis, and was intrigued by the combination of what seemed like a paranormal element and music and boarding school.

Right away, the writing drew me in. Within the first few pages, I was sucked into the story, and although it was confusing at first, I ended up enjoying the way the story switched from following Sing to following some other characters, and when it all came together, it was like a big ‘Aha!’ moment in my head.

Of all the different aspects that were put together in this book, it was Nathan’s story that got me the most. I really wanted to know what was going on, and while I think it’s fairly clear early on, I found myself very emotionally invested in the outcome of his part of the story.

At times I felt that things dragged on a bit, mostly towards the middle, but overall the pacing was just right. It didn’t feel too rushed, and in a way, I wasn’t quite ready for the story to end, mostly because I was afraid that it would break my heart.

I liked Sing. She had a lot on her shoulders I think, in terms of her mother’s legacy and her father’s fame, and I think she was doing the best she could in the situation. She was still trying to figure out who she was and what she wanted, not what her mother would have wanted or what she thought her father wanted for her, and that’s not an easy thing to do when everyone in your school is watching you.

I loved the slow-building relationship with Sing and Nathan. They were clearly not going to get along from the start, and while her heart may have seemed to belong to someone else initially, I really enjoyed seeing how her antagonism towards Nathan changed as they spent more time together and she learned more about him.

Overall this was a story that surprised me because I went in not really knowing what to expect. I don’t think it will be for everyone – some may find it too slow or may not like the way the paranormal/supernatural element combines with the rest of the story – but I loved this. I’m eager to see what this author has in store for a second book!