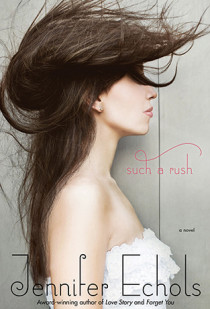 Heaven Beach, South Carolina, is anything but, if you live at the low-rent end of town. All her life, Leah Jones has been the grown-up in her family, while her mother moves from boyfriend to boyfriend, letting any available money slip out of her hands. At school, they may diss Leah as trash, but she’s the one who negotiates with the landlord when the rent’s not paid. At fourteen, she’s the one who gets a job at the nearby airstrip.

But there’s one way Leah can escape reality. Saving every penny she can, she begs quiet Mr. Hall, who runs an aerial banner-advertising business at the airstrip and also offers flight lessons, to take her up just once. Leaving the trailer park far beneath her and swooping out over the sea is a rush greater than anything she’s ever experienced, and when Mr. Hall offers to give her cut-rate flight lessons, she feels ready to touch the sky.

By the time she’s a high school senior, Leah has become a good enough pilot that Mr. Hall offers her a job flying a banner plane. It seems like a dream come true . . . but turns out to be just as fleeting as any dream. Mr. Hall dies suddenly, leaving everything he owned in the hands of his teenage sons: golden boy Alec and adrenaline junkie Grayson. And they’re determined to keep the banner planes flying.

Though Leah has crushed on Grayson for years, she’s leery of getting involved in what now seems like a doomed business—until Grayson betrays her by digging up her most damning secret. Holding it over her head, he forces her to fly for secret reasons of his own, reasons involving Alec. Now Leah finds herself drawn into a battle between brothers—and the consequences could be deadly.

I think I was drawn to this book because of the cover, and because of the flight aspect. It just sounded different and interesting. I was expecting a fluffy, coming of age love triangle kind of story, but I was pleasantly surprised by how gritty this book was at times.

Leah has a tough life, having moved around countless times with her mother, who seems like a crappy parent, since she’s always ditching Leah to spend time with her boyfriends, and taking the money Leah earns at the airstrip. Secretly, she begins taking flying lessons from Mr. Hall, who actually treats her like a person, unlike his sons (who ignore her for the most part) or the kids at school (who treat her like trash). Fast forward two years and Leah is working for Mr. Hall, towing banners behind a plane, until Mr. Hall suddenly dies, leaving Leah’s job and Mr. Hall’s business up in the air (haha, pun not intended).

I was a bit caught off guard by how cruel the characters were to each other at times. There’s all sorts of vulgar language and nasty name-calling, which definitely made this book stand out from other contemporary YA books I’ve read. I’m not sure that that’s a good reason to stand out thought! And people are really really unkind to each other: Leah’s mom to Leah, Leah to Grayson, Grayson to Leah, Leah and her best friend Molly to each other, etc. At times, I wondered if this book was a bit too bleak for me. I also had some issues with the way everyone apparently thought Leah was slutty and used her body and sexuality to get what she wanted. At times, she sort of seemed to do that, but at other times, she seemed surprised that people would think of her that way. I’m not really sure where my opinion lands on that aspect of the story, since I think it did tell me a lot about Leah and what her life was like, as far as how other people saw her and having to deal with that, but I was also irked that she seemed to willingly reinforce people’s low expectations of her.

However, there are also really great moments of humour and the scenes where Leah reflects on why she loves flying helped draw me back in to her story. The early scenes where she was learning to fly were really interesting.

As far as the romance goes, there was definitely some heat between Leah and Grayson! Wow! But as for Grayson’s plan to force Leah to date Alec, I just wasn’t buying it. Leah went along with it even though Grayson wouldn’t tell her why, and then by the end when she learned his reasons behind the whole scheme, it seemed flimsy to me.

Overall, though, I was slowly drawn into this story, and I do love a happy ending, which thankfully this book had! If you like grittier, tougher contemporary YA, this may be the book for you!