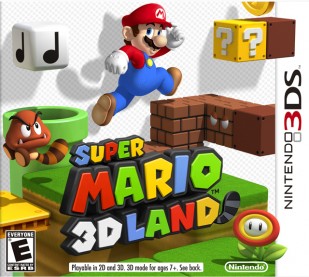 This is Nintendo’s newest Mario game, released in North America on November  13. I pre-ordered mine from Future Shop a while ago, and received it on November 14, which was sooner than I expected. I have been playing this game non-stop since then!

As much as I’ve loved the recent 3D-esque Mario games like Galaxy 1 and 2, I have always preferred the traditional side-scrolling platformers from the NES and Super NES era. The beauty of this game is that it combines the two types of games into one game!

It plays like a classic platformer, but in 3D. While you can play the game with the 3D turned off, it really is designed to be played in 3D. Not only does the game look amazing in 3D, but it helps you to see where to jump, and helps you understand the distance between yourself and objects/enemies, etc.

The story is the usual Princess Peach has been kidnapped deal, and is told briefly in a little intro movie. Then it’s off to world 1-1! There are eight worlds in the main game, with a handful of levels, sometimes a Toadhouse, and sometimes a mystery box, where you have 10 seconds to kill the enemies inside in order to receive a star coin. Then it’s off to either a ‘Bowser’ battle, or an airship, and on to the next world.

Each level contains three star coins, which are needed later in the game to unlock certain levels, and then to access post-game ‘special’ levels, which present more of a challenge than the main game. Being a completionist, I definitely wanted to try and get all of the star coins as soon as possible. Most of them aren’t difficult to find, but there are a few that are cleverly hidden.

Beating the main game levels usually aren’t too tricky, but if you’re trying to get all of the star coins, you may find it more challenging. An additional challenge is to reach the very top of the flagpole that marks the end of the level. Not only does this result in a 1-up, but you will also get a gold flag at the top of the flagpole, instead of the red one that results from Mario touching the flagpole.

Completing the game, achieving all gold flagpoles, obtaining all star coins, and a couple of other achievements will add stars to your save file. If you aren’t a completionist, you may not care about that, but I like the extra challenge it provides, and I do feel pretty proud of myself for accomplishing those goals.

If you beat each level in a world in the main game with all star coins, you will unlock a corresponding ‘special’ world in the post-game. For example, 100% completing world 1 unlocks special world 1; 100% completing world 5 unlocks special world 5; etc. These special worlds are a mix of brand new levels, and variations on existing levels, including speed runs (you’re given a limited number of seconds at the start of the level and have to acquire tiny stopwatches as you make your way through that will increase the time limit) and cosmic clones (tiny clones that will follow you all the way through the level and hurt you if they catch up with you).

I’ve 100% completed the first five special worlds so far. As with the main game, just beating the levels isn’t usually too challenging, but I had some rage moments going for all of the star coins in some of the special levels.

You also unlock the ability to play as Luigi once you beat Bowser in the main game, and apparently you get another star on your file once you beat every level as Luigi as well. I don’t know if that’s true, but I plan on finding out.

This game also uses the 3DS Streepass functionality. When you get a Streetpass tag from someone who has this game in their system, you will get to see their best times on each level, as well as receive a special mystery box. I’ve had a couple Streetpasses with this game already and it’s pretty fun to see how much faster or slower you are than other players, and to get some little mystery boxes.

There are the usual mushroom and fire flower power ups in this game, and the tanooki suit, last seen in Super Mario 3 on the NES, makes a welcome appearance. There is also a boomerang flower, which I liked a lot, and a propeller hat.

The levels may seem short, but for a handheld, I think they’re perfect. You want to be able to pick up and play for a few minutes and make some progress and then be able to put it down again, compared to console games where you expect to play for longer stretches and the levels are longer.

I really, really love this game. If you have a 3DS, you must own this game!