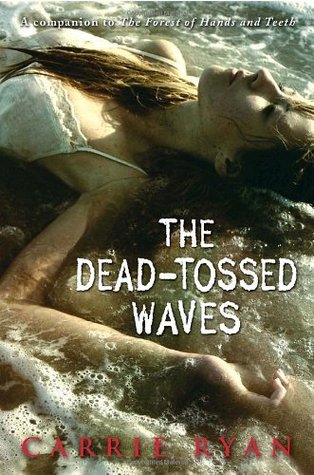 The Dead-Tossed Waves By Carrie Ryan

Series: The Forest of Hands and Teeth #2

Published by Delacorte Press on March 9, 2010

Gabry lives a quiet life. As safe a life as is possible in a town trapped between a forest and the ocean, in a world teeming with the dead, who constantly hunger for those still living. She's content on her side of the Barrier, happy to let her friends dream of the Dark City up the coast while she watches from the top of her lighthouse. But there are threats the Barrier cannot hold back. Threats like the secrets Gabry's mother thought she left behind when she escaped from the Sisterhood and the Forest of Hands and Teeth. Like the cult of religious zealots who worship the dead. Like the stranger from the forest who seems to know Gabry. And suddenly, everything is changing. One reckless moment, and half of Gabry's generation is dead, the other half imprisoned. Now Gabry only knows one thing: she must face the forest of her mother's past in order to save herself and the one she loves.

This is the second book in Carrie Ryan’s Forest of Hands and Teeth series. I enjoyed that book, and if you did too, then I would recommend this book.

Gabry is the daughter of Mary, the protagonist from the first book. They live in Vista, a small ocean-front town, protected from Mudo (this is what the people in Vista call the Unconsecrated). Gabry’s life is safe and sheltered, until one night she venutures beyond the town’s barriers with some friends to visit an old amusement park, where the group is attacked by Mudo. The events of this night change everything, and eventually Gabry has no other choice but to venture into the Forest, as her mother did many years earlier.

As with the first book, this book has a lot of action, and it didn’t take long for it to get started.

I really liked the way that we learn things in this story that explain aspects of Mary’s life and her village, e.g. why the Unconsecrated named Gabrielle was so fast. I don’t want to say much and give away the plot though, so I will talk instead about aspects of the book that I liked.

I also thought the romance aspects of this book were more believable than in the previous book. Gabry did begin to take some risks, not just for a boy, but for her best friend as well. However, Gabry’s actions were often based on her guilt at believing that she is responsible for the terrible things that happened that night at the amusement park. She was a reluctant hero until the end of the book, when she begins to understand that there is a bigger world than she thought, and that there are dangers but  that sometimes you have to take risks. This progression was believable and made it easy to like Gabry.

There are many interesting aspects of the infection and its effects that are revealed in this book, and I can only hope that the author reveals more in the next book in the series, The Dark and Hollow Places. When reading about or watching zombies, I am always fascinated with the story of how they came to be that way, what the cause is of the disease or infection that leads to the zombification, and what, if any, organized resistance exists.

I really appreciated the way that Mary’s experiences and the events of The Forest of Hands and Teeth influenced events and characters in this book. This story built on the first book and I am eager to see how the next book builds on what we learn in this one. Now I just have to wait until next month to find out!