Winnie Flynn doesn’t believe in ghosts. (Though she wouldn’t mind a visit from her mom, explaining why she took her own life.) When her mysterious aunt Maggie, a high-profile TV producer, recruits Winnie to spend a summer working as a production assistant on her current reality hit, Fantastic, Fearsome, she suddenly finds herself in the one place her mother would never go: New Jersey.

New Jersey’s famous Devil makes perfect fodder for Maggie’s show. But as the filming progresses, Winnie sees and hears things that make her think that the Devil might not be totally fake after all. Things that involve her and her family. Things about her mother’s death that might explain why she’s never met Aunt Maggie until now.

Winnie soon discovers her family’s history is deeply entwined with the Devil’s. If she’s going to make it out of the Pine Barrens alive, she might have to start believing in what her aunt is telling her. And, find out what she isn’t.

I was interested in this book because of its format, combining letters, pictures, and TV transcripts. Sadly, the format didn’t entirely work on the e-arc that I read, but it worked well enough for me to get the idea, and I liked the combination.

I’m not really a horror aficionado, but I got a kick of out Winnie’s pop culture and horror references throughout the story. I also loved Winnie’s skepticism. I love reading horror and supernatural stories, I think partly because I don’t believe in that stuff, so it’s fun to read and let myself think “what if”. So it was fun to see Winnie be as non-believing as me!

Of course, Winnie hears and sees things throughout the story that cause her to question what she believes, including what she believes about her mother’s death. Things got really interesting as her experiences challenged her beliefs and she tried to get to the bottom of her mother’s apparent suicide.

This was a fun, quick read and I like the humour. I also liked the story about Winnie and her mother – it was really touching. However, the book wasn’t as creepy or scary as I’d hoped – although that might be a plus if you’re not too big on horror! Recommended! 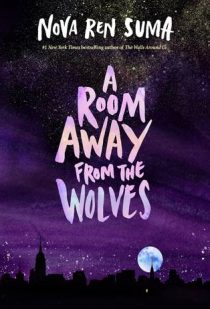 A Room Away From The Wolves (Blog Tour & Giveaway)