The Girl Who Stopped Swimming 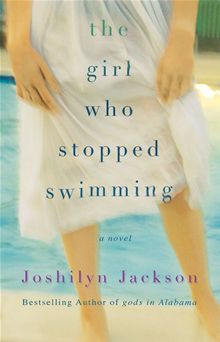 The Girl Who Stopped Swimming By Joshilyn Jackson

Laurel Gray Hawthorne needs to make things pretty. Coming from a family with a literal skeleton in their closet, she's developed this talent all her life, whether helping her willful mother to smooth over the reality of her family's ugly past, or elevating humble scraps of unwanted fabric into nationally acclaimed art quilts.

Her sister Thalia, an impoverished "Actress" with a capital A, is her opposite, and prides herself in exposing the lurid truth lurking behind life's everyday niceties. And while Laurel's life was neatly on track, a passionate marriage, a treasured daughter, and a lovely home in lovely suburban Victorianna, everything she holds dear is thrown into question the night she is visited by an apparition in her bedroom. The ghost appears to be her 14-year-old neighbor Molly Dufresne, and when Laurel follows this ghost , she finds the real Molly floating lifeless in her swimming pool. While the community writes the tragedy off as a suicide, Laurel can't. Reluctantly enlisting Thalia's aid, Laurel sets out on a life-altering investigation that triggers startling revelations about her own guarded past, the truth about her marriage, and the girl who stopped swimming.

Richer and more rewarding than any story from Joshilyn Jackson, THE GIRL WHO STOPPED SWIMMING is destined both to delight Jackson's loyal fans and capture a whole new audience.

This was a great book! It’s the first one I’ve read by Joshilyn Jackson and now I want to read her other books.

Laurel has seen ghosts her whole life – one ghost, to be specific: her dead uncle Marty, her father’s brother. So it isn’t all that unusual when she sees the ghost of Molly, her daughter’s friend. Molly’s ghost leads Laurel to her body, floating in Laurel’s pool, and once the initial shock wears off, Laurel decides to get to the bottom of things.

To do so, she needs the help of her sister Thalia, an eccentric actress who clashes with quiet, reserved Dave, Laurel’s husband. Thalia is critical of Laurel’s charming suburban life, constantly trying to get Laurel to admit that she isn’t as happy as she appears to be. The tension and conflict in the relationships between these three characters was really well done.

Laurel’s mother is from a very impoverished community that she has long ago left behind, but Laurel makes a trip out there every Christmas to drop off food and gifts for the relatives who still live there. She has always tried to keep Dave and her daughter from that place, but her daughter’s growing curiosity has led to a friend named Bet, a young girl about Shelby’s age, who comes to stay with them when Molly dies.

While solving the mystery behind Molly’s death, Laurel comes to see her relationships with Thalia, Dave, her daughter Shelby, and her parents in a new light, and re-examines her memories and the truth of her uncle Marty’s demise.

I liked the way it was presented very matter-of-factly that Laurel has seen her uncle Marty’s ghost her entire life, and then sees the ghost of Molly. There were some eerie moments in the book, but it isn’t a ghost story as I had expected.

I liked the character of Laurel. I liked that she enjoyed her life and that she and Dave were so in love. Thalia, on the other hand, was not an easy character to like. She was always trying to throw a wrench in Laurel and Dave’s marriage, which made me really angry. She doesn’t see how Laurel can be happy in a life that is so different from her own, but in the end, I believed that she loved her sister and that they would be able to mend their relationship.

I also liked the character of Laurel’s husband, Dave. Maybe it’s just because I’m getting married later this year, but I was really happy to read about a married couple that was truly in love and happy and accepting of the other person as he/she is.

The ending and resolution of Molly’s death went in a direction that was a bit unexpected, but it was very good. I also loved the unraveling of the family secrets! Laurel begins to recall events from her childhood and this causes her to question things that she has long believed.

I’ve recently read some negative reviews, but many of them seemed to compare this book to Joshilyn Jackson’s earlier works, which I haven’t read.  I thought this book was great and I definitely recommend it!