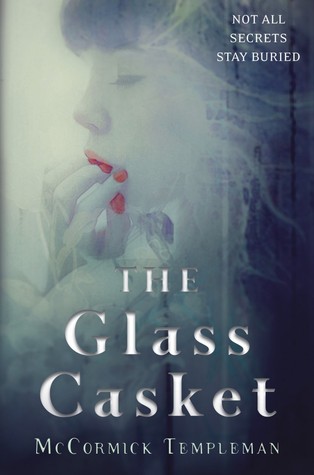 The Glass Casket By McCormick Templeman

Published by Delacorte Press on February 11, 2014

Death hasn't visited Rowan Rose since it took her mother when Rowan was only a little girl. But that changes one bleak morning, when five horses and their riders thunder into her village and through the forest, disappearing into the hills. Days later, the riders' bodies are found, and though no one can say for certain what happened in their final hours, their remains prove that whatever it was must have been brutal.

Rowan's village was once a tranquil place, but now things have changed. Something has followed the path those riders made and has come down from the hills, through the forest, and into the village. Beast or man, it has brought death to Rowan's door once again.

Only this time, its appetite is insatiable.

I fell in love with this book’s cover as soon as I saw it, and when I read the synopsis, this book jumped to the top of my ‘Must Read’ list. It sounded like my kind of book, and I was so excited that I pre-ordered a copy well before it came out earlier this year.

Then, as so often happens, the book sat on my shelf for ages. Sometimes, the more excited I am about a book, the longer I take to actually pick it up and read it. I’m not sure why that is. It isn’t necessarily a conscious decision. I think the anticipation of reading something I’m very excited about is such a delight, and combined with the worry that it might not live up to my hopes and expectations, it means that I will wait and wait and wait to take the book off my shelf, forsaking all other books I could be reading instead, and jump in.

Once I picked up The Glass Casket, I fell in love right away with the setting, the characters, and the writing. This was a book that, although I read it in two days, felt like it was a world I could easily lose myself in, taking my time to read it and enjoying seeing where the story would take me.

I felt like I was reading a dark, twisty fairy tale, with the village and its inhabitants, the folklore, and the fantasy elements mixed into the story. It was great! It even felt like there were hints of Little Red Riding Hood throughout the book. And I loved the main character, Rowan: she was intelligent and wanted to be a scholar, perhaps even move away from the village, despite the expectation that she would marry and basically abandon her dreams and ambitions to be a wife. And the story, with its violence and darkness, with increasing suspense and tension and a mounting body count, pulled me in. By the end, I was reading quickly, eager to see what would happen, and I stayed up past my bedtime to finish this one!

Sadly, the book lost me somewhat at the end. The big reveal felt rushed (although maybe that’s my fault for being so eager to learn what would happen and reading quickly), and I was disappointed because I’d been hoping, I suppose, for more. When I learned what was going on in the village and who was behind it, I wanted to know more about the characters and their motivations than I ultimately did.

The romance, although slight, between Rowan and another character was also somewhat of a negative for me. Although I could see it coming very early on, I wasn’t satisfied with it when it did come, for reasons that I can’t quite put my finger on.

However, I’m rating this book four stars because it was very nearly perfect for me, and now I want to read the author’s previous book, The Little Woods. I definitely recommend The Glass Casket!