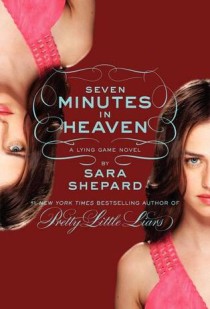 This is the sixth and final book in the series, and I was really excited to read it and see how it all ended. SPOILER ALERT if you haven’t read the other books in this series.

My sister wants the truth.

But sometimes the truth hurts.

For months, my long-lost twin, Emma, has been living my life and trying to solve my murder. She’s unearthed dark secrets about my friends, my family, and my tangled past. But when it comes to finding my killer, she keeps running into dead ends.

Until my body shows up in Sabino Canyon. Suddenly everyone knows there are two girls who look like Sutton Mercer—and that one of them is dead. At first the police assume the body is Emma’s. But as questions and accusations start flying, it’s harder than ever for Emma to keep playing me. The truth is bound to come out eventually. And when it does, Emma will be suspect number one in my murder investigation. If she can’t find my killer before time runs out, she’ll end up behind bars . . . or worse.

So I was right about one of my predictions, and wrong about another. I’ll go into detail later, and it will be spoiler-y, but for now I’ll talk about other things.

First of all, there was way too much going on the night Sutton died, and as much as I love this series, it bothered me that I had to suspend any sense of disbelief as much as I did to be able to accept that all these things happened one after the other in the canyon on the same night (I am likely putting them out of order): Thayer and Sutton talk and he gets run down by someone driving her car; her dad shows up; Becky shows up; Garret shows up; she gets killed. Am I leaving anything out? Of all the kind of crazy and ridiculous things that happen in this series, this series of events taking place in a single location and evening irked me.

I was hoping to get to know some of the other characters, like Sutton’s friends, a bit better before the end of the series, but I never really felt that I did. I think that’s because Emma didn’t really know them, and pretty much saw everyone as a suspect at one time or another, and so as the reader I never really felt that I knew or cared about these other people as much as I wanted to.

I loved Emma though. She was very likeable and one of my favourite things about the series was seeing her evolving relationship with Lauren, Sutton’s sister (actually Sutton and Emma’s aunt). I also liked seeing her relationship with Sutton’s parents develop, particularly as Sutton revealed that she wasn’t really the nicest daughter, or sister, and seeing Emma try to connect with this family was really touching.

So now onto my predictions. SPOILERS! YOU’VE BEEN WARNED!

First of all, my theory that Sutton was somehow still alive was definitely wrong. Even when her body was discovered and was all skeleton-y and mangled, I thought that it could be another red herring, but nope. She died. Still, I liked the final few chapters of the book showing Emma’s life after the truth came out and people knew who she really was – and that she did not kill Sutton to take over her life – and that Sutton was watching over her for a while. I was actually pretty sad when Sutton’s spirit or whatever she was finally began to move on. I didn’t realize how much I had been hoping she was still alive somewhere, somehow, which I know is silly when we’re told from the very first book that she is dead. But I’m glad she got to see her family accept Emma and take her in, and that she felt at peace in the end.

As for the identity of the killer, yes, it was Ethan. I felt that it had been so obvious for so long, and I was really hoping that the end wouldn’t be that predictable, but it totally was. Although I have to say, I liked that he turned out to be some total psycho who had everyone fooled. That was more entertaining than if he had just confessed his love to Sutton and accidentally pushed her off the cliff or something. But for someone who wants to be an investigative journalist, I was bummed that Emma didn’t figure this all out until Ethan attacked her. And it’s too bad Nisha got caught in the middle and was killed for what she knew.

I don’t know who might have been a ‘better’ choice for the killer. Pretty much everyone Sutton knew was a suspect to Emma over the course of the series: Laurel; Sutton’s dad; Garrett; any of Sutton’s friends; Becky…probably more that I’m not even remembering. I think that, for me, there’s always a sense of disappointment at the big reveal of a mystery like this, since I’m always hoping that I’ve been right all along while at the same time hoping that the author will surprise me with something I never saw coming.

This was still a fun, entertaining series to read, and I would recommend it if it appeals to you in any way, especially if you’re a fan of Shepard’s Pretty Little Liars books.