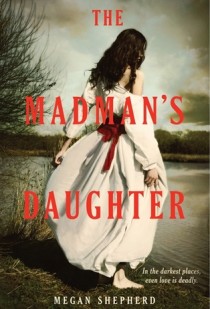 This is the first pick for the YA Book Club I joined, and I was already planning on reading this, so that worked out perfectly! Slight spoiler warning for this book.

Sixteen-year-old Juliet Moreau has built a life for herself in London—working as a maid, attending church on Sundays, and trying not to think about the scandal that ruined her life. After all, no one ever proved the rumors about her father’s gruesome experiments. But when she learns he is alive and continuing his work on a remote tropical island, she is determined to find out if the accusations are true.

Accompanied by her father’s handsome young assistant, Montgomery, and an enigmatic castaway, Edward—both of whom she is deeply drawn to—Juliet travels to the island, only to discover the depths of her father’s madness: He has experimented on animals so that they resemble, speak, and behave as humans. And worse, one of the creatures has turned violent and is killing the island’s inhabitants. Torn between horror and scientific curiosity, Juliet knows she must end her father’s dangerous experiments and escape her jungle prison before it’s too late. Yet as the island falls into chaos, she discovers the extent of her father’s genius—and madness—in her own blood.

First of all, if you are squeamish at all about surgical stuff, be warned that there is much of that in this book. And I have to mention that there are many passages describing surgeries and vivisections performed on animals – I normally cannot stand to read anything about harm to animals, so I found myself skimming much of that aspect, but I do believe it was really important to the plot, so I can understand why it was in the book, even if I didn’t necessarily want to read all of the gruesome details!

There were some very interesting book club discussions about this one! One of the subjects we discussed was the science aspect of the book. There were numerous passages describing vivisections and surgical procedures in detail, and they seemed very realistic to me, even if the procedures themselves were pure science fiction. I felt that, no matter the outcome of the procedures, I believed in the science of the book, for the most part. There was one element towards the end that I couldn’t quite believe, as it felt more magical, as someone at book club put it, than scientific, and I completely agree.

The story itself was pretty interesting, and had its fair share of plot twists. There was one pretty major one that I saw coming, but not until later in the book. There were moments where it felt like not much was happening, but overall, I think I enjoyed the story. I also liked Juliet. She was strong and intelligent, but she was also flawed. She struggled a lot with her curiosity and interest in science and her father’s work, despite her revulsion at its results. Similarly, Montgomery was an interesting character because he assisted Dr. Moreau with his horrible work, yet he also cared for them as living beings, unlike the doctor.

There was a bit of a love triangle between Juliet, Montgomery, and Edward, but I wasn’t really feeling it. I felt like Juliet had clearly stronger feelings for one of them than the other, so I didn’t really feel that there was any doubt over who she would choose.

I had hoped that the doctor would be a more complex and interesting character than he was, so I was disappointed with that aspect of the story. He was a man of science, and that is what drove him and sustained him. I wish it had been explored a bit more, but I recognize that this is Juliet’s story, not his.

I would be remiss if I did not mention Balthazar! He was one of Doctor Moreau’s creations, but in the end, he seemed to be the most human of them all. Although the doctor wanted to imbue these creatures with reason and rationality, Batlthazar wept at the sound of music, wanted to learn to read, and was friendly. I was surprised by how much I had grown to care for him by the end of the book, and the contrast between how both Juliet and I reacted to him at the beginning of the book and the end.

I think this was a great pick for the Chapters Pinecrest YA Book Club’s first selection. There was a lot to talk about, and it was so great to hear what everyone had to say about it. Although I mentioned a lot of things I didn’t like during our chat, I think I forgot to say that overall, I quite liked this book and thought it was pretty well-written.

I’m really looking forward to the sequel, which is apparently based on the story of Jekyll and Hyde, because the ending of this book felt like such a cliffhanger! I need to know what happens next!