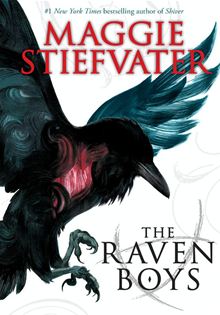 The Raven Boys By Maggie Stiefvater

Published by Scholastic Press on September 18, 2012

It is freezing in the churchyard, even before the dead arrive.

Every year, Blue Sargent stands next to her clairvoyant mother as the soon-to-be dead walk past. Blue herself never sees them—not until this year, when a boy emerges from the dark and speaks directly to her.

His name is Gansey, and Blue soon discovers that he is a rich student at Aglionby, the local private school. Blue has a policy of staying away from Aglionby boys. Known as Raven Boys, they can only mean trouble.

But Blue is drawn to Gansey, in a way she can’t entirely explain. He has it all—family money, good looks, devoted friends—but he’s looking for much more than that. He is on a quest that has encompassed three other Raven Boys: Adam, the scholarship student who resents all the privilege around him; Ronan, the fierce soul who ranges from anger to despair; and Noah, the taciturn watcher of the four, who notices many things but says very little.

For as long as she can remember, Blue has been warned that she will cause her true love to die. She never thought this would be a problem. But now, as her life becomes caught up in the strange and sinister world of the Raven Boys, she’s not so sure anymore.

I’ve heard sooo many good things about this book and I seriously don’t know why it’s taken me this long to get around to reading it (hmm, probably because my ever-growing TBR is full of books that I MUST read).

I don’t even know where to begin, because I loved this book and as strange as the plot seemed to me at first, I was completely drawn in right away.

The story begins with Blue, who we learn is from a family of psychic women, although she herself is not psychic. Her presence, though, can help amplify the abilities of psychics, which is why each year on St. Mark’s Eve, she stands out in a churchyard with her mother, who can see the soon-to-be-dead.  On the night that the story begins, though, Blue is not with her mother, but with Neeve, a half-sister of her mother’s, and suddenly someone appears to Blue. All she learns is his name: Gansey.

We then meet Gansey, wealthy and attending Aglionby, a prestigious private school whose students are dubbed Raven Boys. With the help of his friends Ronan, Adam, and Noah, Gansey is seeking the resting place of Glendower, a legendary king. When he meets Blue, they don’t exactly hit it off, but eventually Blue is drawn into the search with these Raven Boys.

Oh, and did I mention (as the book summary notes) that Blue has been told her entire life that if she kisses her true love, he’ll die? Holy smokes, talk about angst!

I just completely adore this book. I’ve read a few great books already this year, but this one has topped them all. The plot was dense, the relationships between the characters complex, and I fell in love with these characters in a way that I haven’t done in ages. Oh my gosh, I love all of the Raven Boys! Ronan, Adam, Noah oh Noah, and Gansey. I want to read so much more about them and I am dying waiting for the next book! I even want to hug them. I rarely want to hug anyone, but they all seemed a little damaged and lovable. I can’t even call a favourite – my heart went out to each of them countless times while devouring this book. I won’t go on about all of my feelings because I have SO MANY FEELINGS about these boys and this book, so I’ll just cut it short here. Whew.

I also loved Blue. Despite her initial reaction, she seemed to fit right in with the boys, and whatever was going on between Blue and Adam made me smile and melted my chilly heart somewhat. Team Adam! (Is that a thing? Is there a Team Adam, Team Gansey, whatever thing going on??) Given Blue and Gansey’s scene in the churchyard, they are clearly linked somehow, but I didn’t really get a sense of a blossoming love triangle, for which I am grateful (I’ve had enough of those in my books, thank you!).

I loved the writing in this book. I feel that I’ve read a lot of books with very sparse prose these past few months, and this was so refreshingly vivid.

Everything about this book has me chomping at the bit for the sequel: the mysteries still to be solved; the growth of the characters and what that may do to their friendships; will Blue kiss someone; gah! I am so looking forward to the rest of this series! I can’t believe it took me so long to read this, because it’s amazing and definitely my favourite read this year (yes I know it’s only January!) and now one of my favourite all-time reads. I will totally be re-reading this before the sequel comes out!