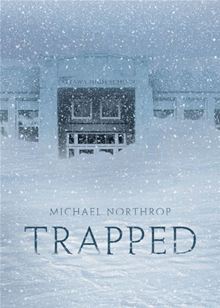 Published by Scholastic Press on February 1, 2011

The day the blizzard started, no one knew that it was going to keep snowing for a week. That for those in its path, it would become not just a matter of keeping warm, but of staying alive. . . .

Scotty and his friends Pete and Jason are among the last seven kids at their high school waiting to get picked up that day, and they soon realize that no one is coming for them. Still, it doesn't seem so bad to spend the night at school, especially when distractingly hot Krista and Julie are sleeping just down the hall. But then the power goes out, then the heat. The pipes freeze, and the roof shudders. As the days add up, the snow piles higher, and the empty halls grow colder and darker, the mounting pressure forces a devastating decision. . . .

This was an interesting book that’s been on my TBR list for a while, and it’s a quick read.

I was really intrigued by the idea of this book. I like reading survival stories, seeing what people will do to get through a dangerous situation, and this seemed like a unique take on the survival genre.

Scotty and two of his friends stay behind after school is let out early due to a snowstorm. At first, Scotty is not happy because the first basketball of the season was supposed to be that night, and he really wants to play. Neither he nor his friends are too concerned about the snow. They decide to stick around school for a couple of hours helping Jason work on his project for shop class, until his dad can come pick them up.

Some time later, they gather at the front of the school with four other students and a teacher who has stayed behind to supervise them while they wait to get picked up. Eventually, as it gets darker and the snowfall gets heavier, they realize that no one is coming to get them – or the next day, or the day after that…

I could feel the tension growing as the days went by. At first, Scotty tried to see their situation like it was some wacky but fun event, looking forward to telling everyone the story about the time they had to spend the night in the school. When they wake up hungry the next morning and contemplate breaking into the cafeteria, Scotty clings to the hope that they’ll be rescued soon, worrying about the trouble they’ll be in if they break anything while they’re trapped.

However, more time passes, and then the power goes out…and then the heat goes off…and then the pipes freeze and they’re out of running water…and Scotty accepts that no one is coming for them.

Because the story is narrated by Scotty, we see the others in the group through his eyes: Les is the troublemaker, Elijah is the weird outcast, Krista is the hot girl, and Julie is the hot girl’s sidekick. We don’t learn too much about them other than what Scotty already knows about them – and how much did you really know about the kids you went to high school with but didn’t hang out with? I’ve read some reviews that criticize the lack of character development, but it didn’t bother me, because we only know them through our narrator, which means we know more about his friends Pete and Jason than we do about the others. Eventually, though, I thought Scotty did come to see some of the others differently, after spending more time together – sort of like The Breakfast Club. He didn’t have any big bonding moments with them or anything, but he had some minor moments where he learned a little bit about them that changed the way he saw them – which felt realistic to me.

I really felt the tension and the danger of their situation. While it didn’t seem too serious to me at first, the way the author describes the cold, dark, and hunger, I began to realize that they were in trouble. Without electricity, heat, proper food, and running water, things began to seem pretty desperate. In the middle of this, the usual hormonal teenage scenarios are taking place, and this ultimately leads to a confrontation that, in its own way, results in tragedy.

I couldn’t help but try to put myself in the situation these characters find themselves in – I remember what it was like to be in my high school when the school day was done. Even when I had a reason to be there, there was always a strangely unsettling feeling about wandering those halls at night, alone. I kept that in mind while reading this book, picturing my high school in the dark, breaking into my old cafeteria, sleeping in my old classrooms…this most definitely contributed to the creepy factor that I felt while reading.

The one thing that upset me about this book – and it’s kind of a big one, and I know I’m not alone in this complaint – is that the book ends abruptly. SO abruptly that I thought my e-book had downloaded improperly and skipped a chapter or two (or three or…). I did not come away from this with any sense of resolution, which frustrated me so much. Grr.

Up to that point, though, I really enjoyed this book, and would still recommend it.