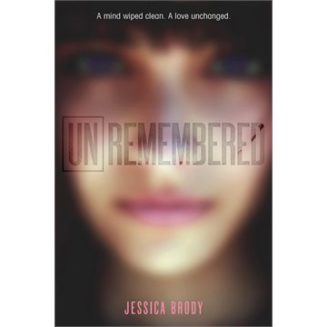 When Freedom Airlines flight 121 went down over the Pacific Ocean, no one ever expected to find survivors. Which is why the sixteen-year-old girl discovered floating among the wreckage—alive—is making headlines across the globe.

Crippled by a world she doesn’t know, plagued by abilities she doesn’t understand, and haunted by a looming threat she can’t remember, Seraphina struggles to piece together her forgotten past and discover who she really is. But with every clue only comes more questions. And she’s running out of time to answer them.

Her only hope is a strangely alluring boy who claims to know her from before the crash. Who claims they were in love. But can she really trust him? And will he be able to protect her from the people who have been making her forget?

As soon as I heard this book’s premise, I knew it sounded like my kind of book. The gorgeous cover helped convince me that I had to pick up a copy!

I was immediately drawn into this book. It opens with Seraphina being discovered among the wreckage of a plane crash. When she’s found, she doesn’t know who she is or how she survived a crash. She doesn’t know certain things about the world, like slang and pop culture references, that piqued my interest. I loved the first few chapters, where Seraphina is in the hospital struggling to remember anything about her life, and then when she stays with a foster family until she can regain her memories.

My interest waned when Zen, the mysterious boy who appears in Seraphina’s hospital room and seems to know her, began to show up everywhere. He clearly knew who she was but kept putting off outright telling her the truth, which frustrated me. I don’t want to give spoilers, but it does say in the summary that Zen claims they were in love, so I’m going to assume that I can go ahead and say that there is a romance between their two characters. Anyway, it was too overwrought for me. I couldn’t help but roll my eyes when the mystery of Seraphina’s identity, and why some scary people were after, was pushed to the back burner for the romance element. I was so much more interested in learning about who Seraphina was and why people were after her than I was in the romance.

I liked the characters, especially Seraphina and Cody, her 13 year old foster brother. Even the villians were interesting. The only character I struggled to like or find interesting was Zen, but I think I just have a lower threshold of appreciation for romance when I read. Or maybe it’s that he didn’t feel as fleshed out as other characters did – he was a bit bland for me. Or perhaps it’s just that I loved the premise and first part of this book so much that I was disappointed when it turned into a major love story.

The science fiction aspect of this story was pretty light on the ‘science’, and I was hoping for more of an explanation but it looks like I’ll have to wait for the next book in this series to learn more. What I did learn here definitely hooked me on the story, though, and there was a twist at the end that I really liked (it was something totally up my alley) and has me even more excited for the sequel.

Overall, I definitely recommend this book for fans of YA science fiction.