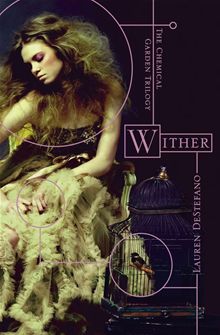 Published by Simon & Schuster Books for Young Readers on March 22, 2011

By age sixteen, Rhine Ellery has four years left to live. She can thank modern science for this genetic time bomb. A botched effort to create a perfect race has left all males with a lifespan of 25 years, and females with a lifespan of 20 years. Geneticists are seeking a miracle antidote to restore the human race, desperate orphans crowd the population, crime and poverty have skyrocketed, and young girls are being kidnapped and sold as polygamous brides to bear more children.

When Rhine is kidnapped and sold as a bride, she vows to do all she can to escape. Her husband, Linden, is hopelessly in love with her, and Rhine can't bring herself to hate him as much as she'd like to. He opens her to a magical world of wealth and illusion she never thought existed, and it almost makes it possible to ignore the clock ticking away her short life. But Rhine quickly learns that not everything in her new husband's strange world is what it seems. Her father-in-law, an eccentric doctor bent on finding the antidote, is hoarding corpses in the basement. Her fellow sister wives are to be trusted one day and feared the next, and Rhine is desperate to communicate to her twin brother that she is safe and alive. Will Rhine be able to escape--before her time runs out?

Together with one of Linden's servants, Gabriel, Rhine attempts to escape just before her seventeenth birthday. But in a world that continues to spiral into anarchy, is there any hope for freedom?

When I purchased this book, I didn’t realize that it was part of a series (even though I now see that it says so right on the cover: The Chemical Garden Trilogy).

For the most part, I enjoyed this book. I like dystopian-type stories, and this was an intriguing premise: through a sort of genetic engineering, cancer and other diseases have been eradicated. However, as an unexpected side-effect, all males and females are born with lifespans of only 25 and 20 years, respectively. I thought this was an interesting idea, and reading about the different ways that the characters dealt with the knowledge of when they would die was interesting as well: some accepted it, some were determined that a cure would be found, some were determined to enjoy the time they had, and some seemed unable to cope with their fate.

There are also hints at some sort of post-apocalyptic event, with North America the only surviving continent – I definitely want to know more about that! Guess I’ll have to wait for the next book, Fever, which is not out until February 2012.

Rhine and her brother were orphaned at a young age, and lived in poverty, constantly on guard against burglars. They also have to contend with Gatherers – men who kidnap young girls to be sold as brides to the wealthy.

Rhine is kidnapped at the beginning of the novel, and brought to Linden, her new husband, a young, wealthy man whose 20 year-old wife is dying. Rhine is one of three new brides brought to Linden: Cecily is the youngest, and excited to be spared from a life at the orphanage, and Jenna, the oldest, whose sisters were killed after being kidnapped by the Gatherers, and who is full of hatred aimed at Linden and his father, Vaughan.

From the beginning, Rhine is intent on remembering where she came from, that she was kidnapped, and that her twin brother is back home, not knowing what’s happened to his sister. However, she develops a brief friendship with Rose, Linden’s wife, right before she dies, and begins to see things differently. She becomes protective of the young Cecily, close with Jenna, and develops feelings for Gabriel, one of the servants in the home.

She also realizes that Linden doesn’t know that the girls were kidnapped and that Jenna’s sisters, along with others rejected by the Gatherers, were killed. He naively believes that they have all come from an orphanage and are happy for their new life. Rhine begins to see that Linden’s father, Vaughan, is really in control of things.

As she spends more time with Linden, she does feel some affection for him, but her true feelings are for Gabriel. As she discovers more about what Linden’s father, a doctor, is doing in the basement of the house, where she is not allowed to go, and her feelings for Gabriel deepen, things become very dangerous for Rhine. She develops an escape plan and intends on making it back home to her brother.

I won’t say any more about the plot, but I thought it was a good, well-written story. I was a little put-off by the polygamy aspect – every time Rhine referred to one of her sister-wives, it just seemed so strange to me. I also was not very comfortable with Cecily, who was 13, I believe, becoming a wife and then becoming pregnant. I had to keep reminding myself that in Rhine’s world, when girls die at the age of 20, it had become very natural for young girls to wed and have children.

The characters were pretty likable. Cecily, given her age, is at times immature and annoying, but because she’s so young and vulnerable, Rhine is protective of her. Despite calling each other sister-wives, I thought the relationships between Cecily, Jenna, and Rhine were believable: they were initially suspicious and mistrusting of each other, but grew to care for each other, although their relationships were not without conflict.

The more I read about Linden, the more he appeared to have been sheltered from life by his father. He seemed to have truly loved Rose, and was a puppet of his father’s. Vaughan controlled everything yet kept Linden in the dark about the reality of many things, such as where his wives came from. There are hints that Vaughan is performing experiments on Rose’s body after she dies,  and Cecily and Linden’s son Bowen, in a search for an antidote.

There is a slight love triangle between Rhine, Linden, and Gabriel, but as much as Rhine feels some sympathy and affection for Linden, it’s clear that she wants to be with Gabriel. Gabriel is a nice boy who has spent most of his life in either an orphanage or working in homes of wealthy people like Linden. I like Gabriel and I look forward to seeing how his relationship with Rhine develops.

This was a good book, with an interesting premise. I l was a bit put-off by the polygamy aspect but got over it, and liked the creepy medical mystery aspect. The more I read, the more I liked this book, so I recommend it, and look forward to the second book.